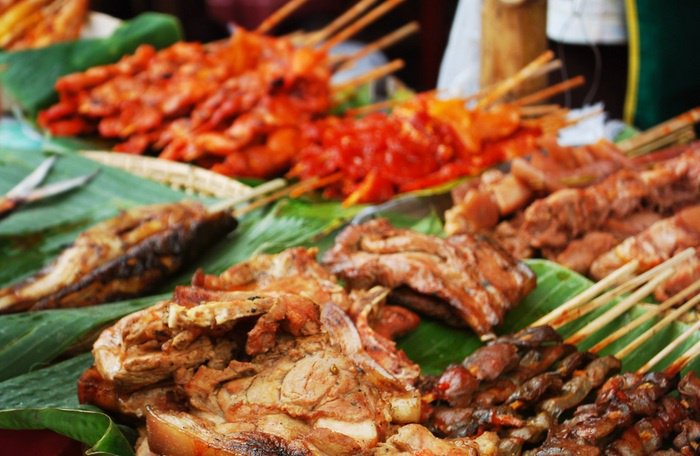 PHUKET: Food on a stick is a very important staple of street food in Thailand.

Coming from the midwest region of the US, I can assure you that we too have our obsession with food on a stick.

That being said, I really enjoy the relaxed atmosphere of food on a stick here. It’s simple, it’s tasty, it’s traditional.

Unsuccessful research into its origin led me to understand that the attraction has something to do with the ‘art’ of impaling a food item on a stick, and that the item thus presented is for people who are ‘sweaty, far from home and confused, or American’. Unfortunately, I think I was misinformed and that the origins actually goes further back than that, to the time when people hunted and fished, cooking their kill over a fire… on a stick, or ‘skewer’.

Phuket is full of wonderful food on sticks. The walking street market in Phuket Town is abundant with hard decisions.

Most of the time, it’s meat, such as pork, chicken satay, fish balls and hot dogs. Sounds boring, but there’s something nice about watching them grill over a fire, or putting the food into a hot pot of oil and scooping it up into a personalized carry bag just for you.

The egg wontons are a favorite, especially served with sweet chili sauce, and let’s not forget the bugs and spiders that attract thousands of photos from tourists every day; surprisingly, they are not that bad.

Vegetarians can enjoy tofu or potato, if they are not squeamish about it being in the same container as meat, and a healthier option comes from the fruit vendors. Granted, the fruit is not cooked on a stick, but it is what you eat it with, sometimes with an excellent sugar-chili mixture.

Vlad the Impaler would surely have mixed emotions about seeing cantaloupe on a stick, but even historical figures get hungry. It’s science.

Phuket street food has brought me back to basics. There is no need for bells and whistles all the time, and when I go home to America for a visit, I will be standing listlessly in a crowd of deep fried cheese curds looking longingly for my egg wontons.