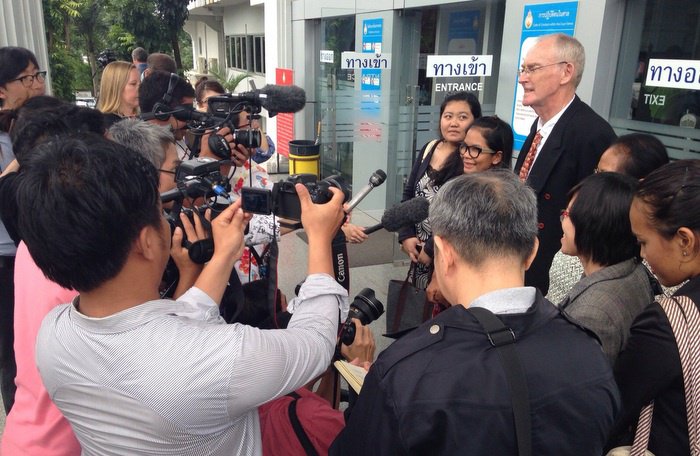 PHUKET: I was deeply relieved to see justice served when the court in Phuket delivered a ‘not guilty’ verdict last week in the case against Chutima Sidasathian and Alan Morison of local news blog PhuketWan.

Though there was a great amount of grandstanding, showboating and circus entertainment for the international media leading up to the trial, it was important that government not use a heavy hand when dealing with the media in this case.

In this, the Thai justice system worked, and should be praised after the onslaught of international condemnation it received.

The fact that the case was pushed by open letters from PhuketWan and a number of human rights groups to Prime Minister Gen Prayut Chan-o-cha, in hopes that he would subvert the legal process, was disconcerting, given that these calls for intervention came in the same breath as the authors’ repeated declarations of the need for free speech in a ‘democracy’.

Among the greatest concerns mooted in the international media was that this case could set a precedent for future cases, eventually leading to the specter of straight-up gagging of the local media in Thailand – ball, duct tape and all. But there is no system for precedents in Thai jurisprudence. Each case is a fresh start.

Since the May 2014 coup, at least 40 individuals have either been convicted or remain in pre-trial detention for offences under Lese Majeste Section 112 and the 2007 Computer Crimes Act, according to the United Nations Office of the High Commissioner for Human Rights.

Does anyone know what happened to Rinda Paruechabut who was arrested under the power of the Computer Crimes Act for allegedly spreading anti-government rumors on social media?

And what about the case of human rights defender Andy Hall? Mr Hall was charged with defamation and computer crimes violations for reporting alleged labor abuses at a large Thai pineapple wholesaler. He is at least getting some international coverage – but it is certainly not on the scale that PhuketWan was able to employ.

The relief I felt when the verdict arrived was not so much for Mr Morrison – with his grand claims of willingness to do jail time in the name of ‘journalistic integrity’ – as it was for Ms Chutima.

In a worst case scenario, Mr Morrison would most likely have been deported in a hailstorm of criticism of the current administration. But Ms Chutima – who had assisted Reuters as they conducted their Pulitzer Prize winning investigation into the Rohingya – wouldn’t have had that option. She was truly facing the possibility of hard time in prison.

Thankfully, the case followed due process with a verdict that was fair to the defendants, to Thais, to Thailand, and yes – to journalistic integrity. But when it comes to freedom of the press, the PhuketWan decision does not by any means see journalism in this country out of the woods.

Just a couple of weeks ago, in the wake of the devastating Bangkok bomb blast, a senior level Thai government spokesman praised the government of China for its skills in ‘information management’. The spokesman went on to warn journalists that the government could “interrupt” them if they did not use discretion in reporting on “negative aspects” of Thailand.