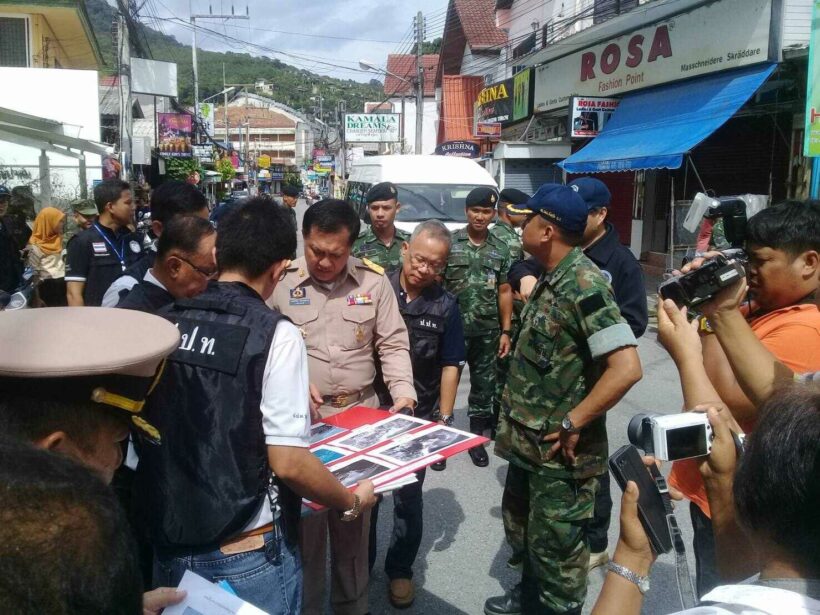 Officials from the Public Sector Anti-Corruption Commission (PACC), led by deputy secretary-general Lt Col Korntip Daroj, have inspected two alleged land encroachments – one in Kamala and one in Rawai.

Officials first inspected the Pak Bang public animal agistment reserve in Kamala which is claimed to be rented by foreigners for their own use.

“The surveyor behind this plot of land was the same person who measured a 200 rai plot of land on Kamala Hill for a former Phuket vice governor. We are questioning the validity of the survey.”

“We found that the claimed area has been registered as an animal agistment area. There are now 63 restaurants and five hotels in this area. Most of restaurants are owned by foreigners. We will continue to investigate the area and the zoning.”

“This area is a 2,500 rai plot of land. The land is in the area of Pa Koh Lon Reserved Forest. The northern boundary connects with Kwan Khao hill. The southern, eastern and western boundaries are with the sea.”

“During our inspection, a letter requesting the investigation of a road which passes through the area of the reserved forest was presented to us. It is being claimed that the road is not permitted by the Royal Forest Department.”

“From the inspection we did not find any residential housing. We only found hotels. There was one large hotel found constructed on the 40rai plot of land.”

“The building’s height is 108 metre above sea level which is over the limit by the Ministry of Natural resources and Environment announcement. We are investigating these issues.”

Romeo, Romeo. What can you do for Ride4Kids?