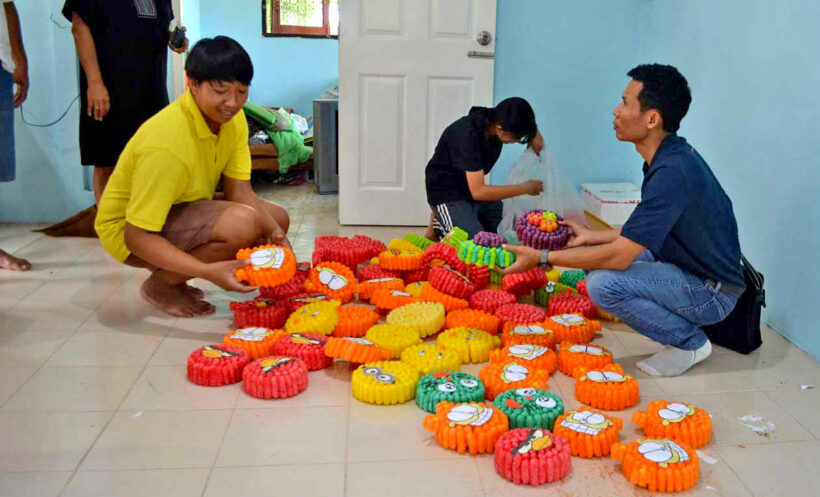 A 15 year old girl in the northeastern province of Nakhon Ratchasima was arrested and fined 5,000 baht for making krathong baskets showing copyrighted cartoon characters. The baskets were ordered by undercover copyright police in, what appears to be, an attempt to lure the girl into infringing copyright laws.

The girl, identified only as “Orm”, says her family was shocked by the planned sting operation.

She had intended to produce flower-patterned floats for this weekend’s Krathong Festival to raise money for her schooling. She offered her services on Facebook.

She had many customers, none of whom ordered a particular pattern, until one customer specifically ordered cartoon characters on the krathong floats. When she delivered them she learned the order came from copyright police, who were waiting for her.

“I made krathong baskets from 8am until 1.30am to fill the order, only to be arrested,” Orm said.

“I don’t usually make baskets with copyrighted characters, but this customer stressed they wanted them. I cried all night because I’ve never faced legal action before. I want to know why they had to do this to me.”

She says she made her krathong from bread and only wanted only to help her family because her father is a low-paid factory worker. Her father said the undercover agent ordered 136 krathong baskets with famous cartoon characters and his daughter delivered only 30. The agent then threatened a 50,000 baht fine. Media report that the girl priced her baskets at 17 baht each.

Her grandfather, a former policeman, later negotiated the fine down to 5,000 baht. Nakhon Ratchasima police confirmed the incident and said copyright agents and police were involved.

The president of the Help Crime Victim Club posted on Facebook saying the girl had been extorted and the club would help her. He cited a ruling that it was illegal to lure someone into violating a copyright.

Accused Ponzi queen and husband in jail, no bail