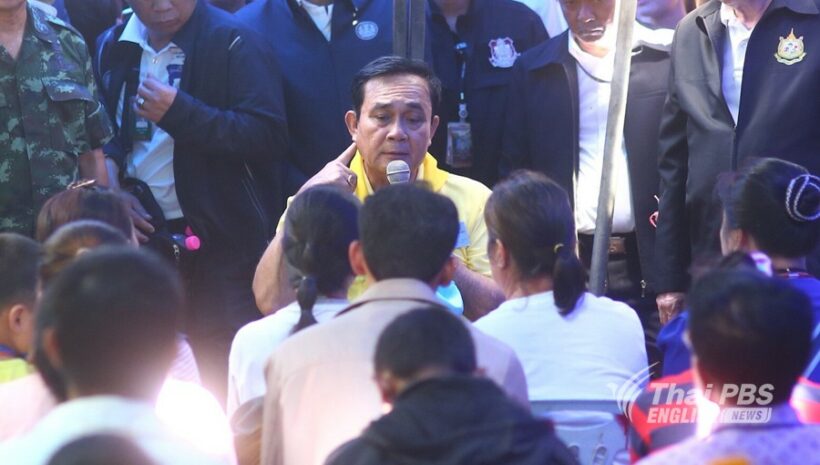 The Thai PM has been visiting the search site at the Tham Luang cave in Chiang Rai’s Mae Sai district today. He’s offered hope to the families of the 12 teenage footballers and their coach saying that they will all survive the ordeal as search reaches its sixth day.

The PM arrived at Tham Luang-Khunnam Nangnon national park this morning as rescue teams frantically continued to find ways to reach into a chamber of the cave where the children are believed to be taking refuge.  Their efforts have been hampered by rough terrains and continuous heavy rains.

In a media stop the Prime Minister expressed confidence in the search and the personnel involved.

“You need to have confidence in your children’s physical fitness and the ability of the rescue teams to help them out.”  He noted that the team were fit and healthy and “should cope with the hardships they are enduring.”

Thai PBS reports that most of the families have been camping just outside the Tham Luang cave ever since the rescue mission was launched last Sunday.  The soccer team went missing late on Saturday afternoon following their regular team practice.

General Prayut was briefed on the latest situation of the rescue operations  before he headed straight to comfort relatives awaiting for good news of their missing children and families.

“I feel as if they were my own children,” Prayut said.

There was one light moment when some of the family members mentioned the possibility of the children being stranded in an area known as “Pattaya beach” inside the cave.

“Let’s do this. If they all come out safe and sound, we will take them to visit Pattaya beach,” the PM said.

The PM took the opportunity to thank foreign experts and rescue teams who had flown in to help and co-operate with the Thai rescue mission.