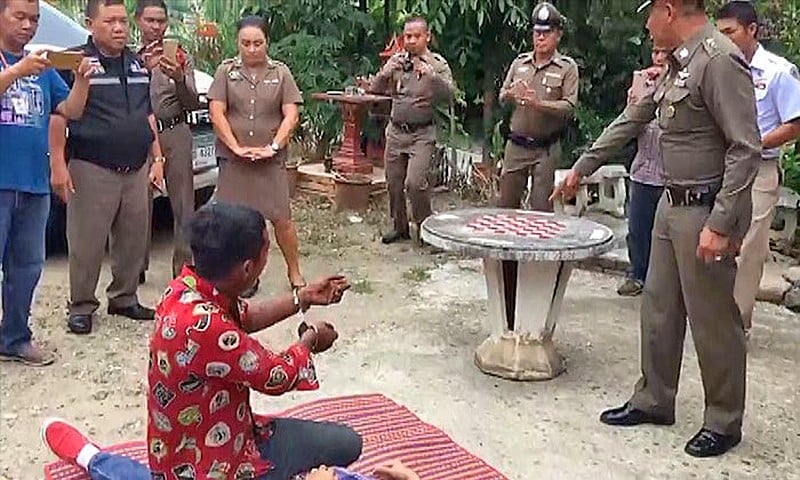 Sanook is reporting that a 30 year old Thai man has told police he raped and robbed a 74 year old Chiang Mai woman because his wife was pregnant and he couldn’t have sex with her. He also claimed that he was drunk.

The rapist, who already has priors and previous jail time for assault and robbery, had been in charge of a children’s fun slide at a travelling fair set up in a neighbouring village.

A re-enactment at the house of the victim descended into chaos as 100 villagers turned up to try to lynch him. Police had to take him away and do the re-enactment at a secure location nearby.

Nim told police that he was in charge of a children’s slide at a fair nearby her village. After work he was drunk and passed the victim’s house where she was sitting out front.

He claims, due to the fact that his wife was pregnant, and wouldn’t engage in sex, he decided to rape the elderly lady. He dragged her to a pond on her property and raped her. Then he slashed her throat with a knife and stole a one baht weight (20,000 baht) gold necklace and 10,000 baht in cash. Local police soon had him in custody.

Deputy head of the Chiang Mai police Pol Col Piyaphan Phatrapongsin was on the scene yesterday. Sanook reports that Nim had already served time in jail in Pattani for robbery and assault.

The man has been charged with rape and robbery, and detained.