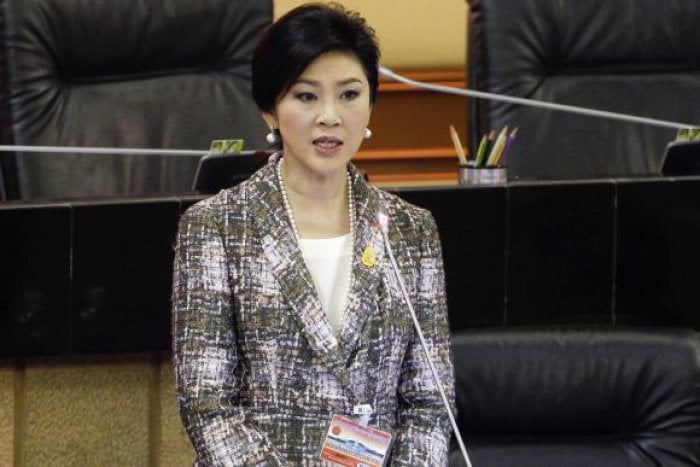 Yingluck will be arrested if she tries to flee: NACC
The Nation / Phuket Gazette

PHUKET: Former prime minister Yingluck Shinawatra, who now faces criminal charges over the rice-pledging scheme, could be arrested if she shows any intention of leaving the country to avoid the court trial, the anti-graft body said yesterday.

Impeachment by the junta-installed National Legislative Assembly (NLA) on Friday was not the end of her troubles because the Office of the Attorney General has decided to indict her in the Supreme Court’s Criminal Division for Political Office Holders in connection with the rice-pledging scheme.

The Election Commission is also looking at evidence to decide whether or not she used state funds and resources for a political campaign ahead of the February 2 election last year, which was the subject of major street protests.

National Anti-Corruption Commission (NACC) secretary-general Sansern Polajiak said the public prosecutor has one month to write and submit a criminal writ to the Supreme Court.

After drafting of the writ is completed, prosecutors have to coordinate with the NACC to inform Ms Yingluck that she has to report to the Attorney General on the day the suit is filed at the court.

If Ms Yingluck fails to turn up, the Attorney General will ask the NACC to fetch her. If it looks like she intends to flee the country, the NACC would ask the police to issue a warrant for her arrest. However, Mr Sansern said he believed the former PM was ready to stand trial to fight the charges.

Former Pheu Thai Party MP Amnuay Khlangpha said the party would not protest over the prosecution of Ms Yingluck on criminal charges or her impeachment because the party wanted peace and stability. He believed Ms Yingluck would not flee the country because she has already announced her intention to fight the charges in accordance with justice procedures.

While some have said they see Ms Yingluck’s impeachment as a chance to open the door for an amnesty and reconciliation, Mr Amnuay believes it would be “extremely appropriate” to issue an amnesty law.

“Reconciliation is just ‘lip service’ without amnesty. These two must go hand in hand,” he said.

National Council for Peace and Order (NCPO) spokesman Col Winthai Suvari said Ms Yingluck’s prosecution was a separate matter that had nothing to do with reconciliation. The NLA voted freely without any influence from the NCPO.

He said Ms Yingluck must still observe the NCPO’s rules and seek permission if she wants to travel abroad, which she has not made done since she was impeached and indicted on criminal charges over the rice-pledging scheme.

Col Winthai said there were no political “undercurrents” that might spark a new round of political conflict after Ms Yingluck’s impeachment. There had been only comments from people with different political attitudes.

Former education minister Chaturon Chaisang posted on his Facebook page that Ms Yingluck’s impeachment was not carried out democratically and the intent was to get the Shinawatra family out of politics.

He foresaw more “ill intentions” of the May 22 coup, such as hitting the strength of Pheu Thai Party, reducing the role and power of elected parties, allowing an unelected prime minister, senators and independent agencies, and increasing the authority of the Constitutional Court.

“I am not instigating protests but the voice of the people is always meaningful and once the collective voice gets louder, it would be strong enough to suspend disaster to democracy,” he said.

Pheu Thai’s acting deputy spokesman Anusorn Iam-saard denied reports that Ms Yingluck would hold a press conference at different places over her impeachment. He said Ms Yingluck would prove her innocence through the justice system.

He said the party hopes that once democracy returns to the country, justice will prevail. “What happened [with her impeachment] is the torment that must be kept in our heart. We will wait till the day the election comes,” he said.

Inquiries into Ms Yingluck’s activities are not over yet. Election Commission chairman Supachai Somcharoen said the EC sub-panel had not completed its probe into the allegation that Ms Yingluck used state funds and resources while campaigning in the North and Northeast prior to the February 2 election.

He said five panel committees would tentatively finish their probe before the end of January but he had no idea if they could wrap up the probe as expected, as he could not interfere.