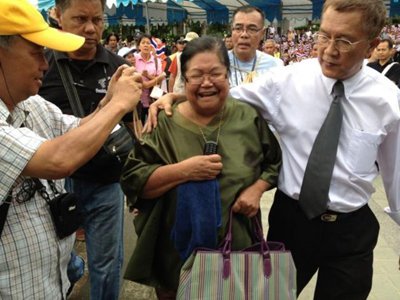 Woman to face royal insult charge pending mental examination
Phuket Gazette / The Nation
PHUKET: Deputy Prime Minister Chalerm Yoobamrung today confirmed police would charge a woman accused of insulting the monarchy if she was found to be sane in a mental status examination.

Last Friday, Thitinan Juntaranont, a 63-year-old Thai expatriate resident of New Zealand, allegedly made improper gestures towards an image of the King displayed at the multi-colour shirt rally during the Constitution Court verdict session on charter change.

Policemen promptly intervened to escort her from the scene, though they refused to press charge on grounds of suspected insanity.

However yesterday Metropolitan Police deputy commander Pol Maj-General Anuchai Lekbumrung said a team has been assigned to look into the allegations.

A number of activists had stepped forward to criticize police for drawing a hasty conclusion before sending the accused for psychological evaluation.

On Tuesday, following the spread of messages via social media sites, a number of Thais rallied at Suvarnabhumi Airport in a bid prevent Thitinan from boarding a flight to Auckland.

Police subsequently clarified that Thitinan had been admitted to the Galya Rajanagarindra Institute to undergo mental tests.

The lèse majesté law allows for a maximum 15-year sentence for every conviction.

Phuket Gazette: The trade in sex and bodies