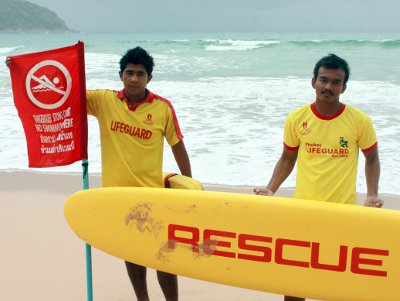 PHUKET: Officially back on the beaches May 28, after another contract signing saga, Phuket lifeguards saved 333 people in the following 31 days, according to an announcement made by Phuket Provincial Administration Organization (OrBorJor) President Paiboon Upatising yesterday.

“Despite the work of the lifeguards, four people have drowned this year. They drowned because they either ignored the red warning flags or went swimming at night,” President Paiboon said.

“I’d like to ask all people and organizations connected with tourism to warn tourists of the potential dangers [on the coastline]. I’d also like for local government officials and beach vendors to coordinate better with lifeguards when it comes to warning tourists.

“In some countries lifeguards have the right to arrest people who ignore their warnings, but in Thailand they can’t,” President Paiboon added.

Under the conditions of the new contract Phuket Lifeguard Service Co Ltd is able to employ 106 staff, both lifeguards and management, at 33 stations on 13 beaches throughout the island.

The lifeguard stations are divided among the three Phuket districts, with 12 covering the southern end of the island in Muang; eight in Kathu covering central Phuket and 13 serving Thalang in the north.

“We have three lifeguards in each station working from 9am to 7pm watching for swimmers in trouble,” said Phuket Lifeguard Service Co Ltd manager Wirote Sawaengphol.

This year, lifeguards have increased the number of red flags being used three-fold.

Red flags, meaning “No Swimming”, are placed to inform potential victims that dangerous currents, submerged rocks and other threats lurk offshore. A yellow flag indicates the area is not supervised by lifeguards, but one may swim with caution. Flags which are yellow and red planted in the sand tell swimmers that lifeguards are on duty and observing the area between the yellow-red flags.

“In both monsoon season and high season, we can’t guarantee swimmers’ safety. There are so many variables, such as jellyfish or other poisonous sea animals, even someone’s underlying medical condition can cause them to drown,” explained Mr Wirote.

“Having lifeguards on duty is really the last ditch effort to saving someone’s life. We’re trying to solve the problem at the wrong end. The best way to warn tourists [and prevent drownings] is through the tour agencies and hotels, as they have a closer relationship with the tourists,” he said

Phuket Lifeguard Club President Prathaiyut “Nut” Chuayuan told the Gazette on July 17 that they were now working on the new warning signs to be installed on Phuket beaches.

“As soon as we get the wording checked by a native speaker of each language the signs will be ready for use. We intend to place the signs next to the red warning flags,” he said.

New crab trap regulations not causing a snag in Phuket

Blade runner – I will run quick