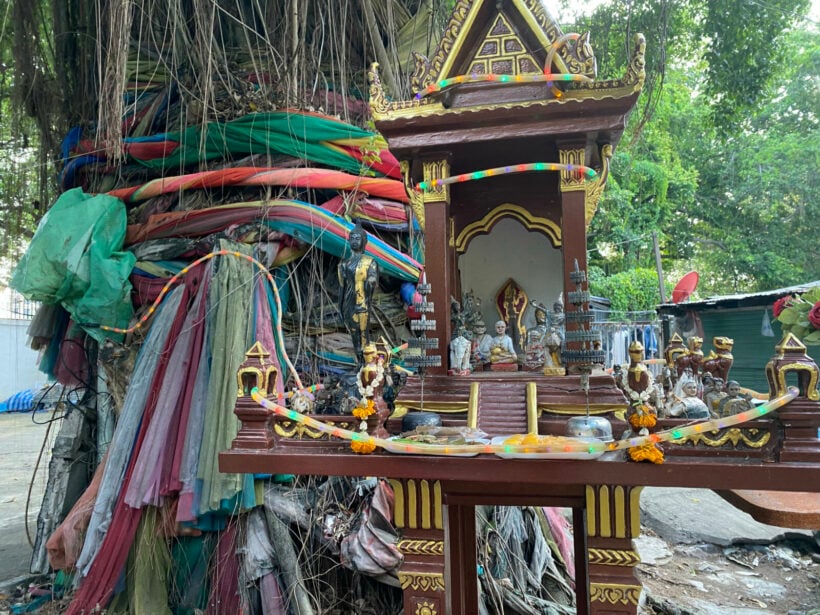 Spirits are everywhere in Thailand. That’s what many locals believe. Spirits are said to inhabit the miniature, temple-like structures, known as spirit houses, which are placed outside nearly every Thai home, plantation, hotel and even between Bangkok’s high-rise buildings. Flowers, bright red soda and other offerings for the spirits are routinely placed on the dollhouse-sized structures as a form of respect to the spirit world as well as to bring luck and to ward off evil.

The shrines are also known as “phi” houses, “phi” meaning spirit, as well as “san phra phum” in Thai, meaning “house of the guardian spirit.” While many visitors attribute the tiny, intricately detailed houses to Buddhism, they were actually are born out of Animism, the practice of believing that objects, places and creature have a spirit. Thai culture fuses both Buddhism and Animism together. For many Thais, almost everything possesses a spiritual essence.

Going along with Animism, the spirit houses fulfill a purpose: to hold a spirit. Many Thais are wildly superstitious and believe that paying respect and acknowledging spirits bring them good luck while also warding off the bad. The houses are built to hold the spirits of the homes or businesses, with Thais believing that if you don’t appease the spirits, they can cause bad things to happen.

Assembling a phi house is not an easy process as it is surrounded by traditions and ceremonies, right down to its chosen colour.  A Buddhist ceremony is held when a phi house is set to be installed, where first, a monk or fortune teller, will perform a reading of an astrological chart. That reading will yield which colour the house should be painted. Then, a 2 metre hole will be dug out, in which owners put amulets, money, and colourful stones in the bottom of the hole. The monk will bless the site where the new spirit house will stand and incense will be lit to get rid of any bad energy.

The phi house’s location is also important and carefully decided, with most being placed in front of a tree, preferably an old one. But, that’s not all. The house should also not be located to the left of a door, and should not face a toilet or a road, or soi, as it is called in Thai.

The houses are placed on either 1 or 4 concrete pillars. Those houses set upon 4 pillars are designated for either the spirit or the ghost of the land, which can bring good or bad luck to its inhabitants. Those standing on 1 pillar are set higher from the ground and feature 2 statues: an old woman and an old man, which symbolise the owner’s ancestors. These houses will also have another phi house where an angel can be found inside holding a sword and money. These are called Saan Pha Phum, with the angel being held responsible for protecting the owners of the land as well as bringing fortune and good luck. 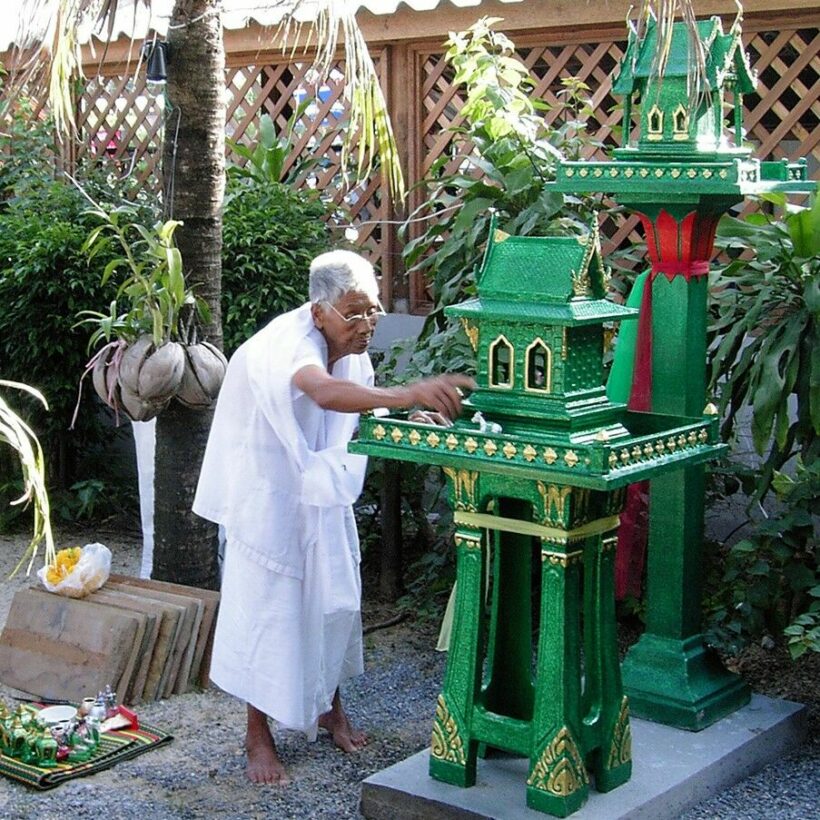 Outside the houses, food and drinks can be found as offerings to the spirits. Common foods include bananas, coconuts, desserts and rice. Any offering of sweet foods or drinks is attributed to the spirits having a sweet tooth. And, for drinks, you may notice that most drinks placed outside the houses are red in colour and look like strawberry Fanta. That’s because they are, indeed, the sweet red soda.

It’s not by mistake that the soda resembles blood as it is meant to do just that. In earlier times, animal sacrifices were commonplace in shrine rituals, but King Rama I made the practice illegal. Now, during bigger phi house ceremonies, animals are not sacrificed, but a pig’s head has come to replace the previous ritual. After celebrating the installation of a spirit house, people then consume the pig head.

Why are animal sacrifices part of the spirit house blessings? The answer lies within the meaning of blood in Thai culture. For blood is synonymous with life. It is also believed that it can bring good fortune as well as keeping the land fertile for crops. So, live animals were traditionally given as gifts to the gods.

As with all traditions, modernisation has occurred, especially with the materials that comprise the spirit houses. In older times, they were handmade of wood.  In some smaller villages, these original types of houses can still be seen. Now, spirit houses are made of metal and concrete as special shops have made the houses in bulk. The houses can be seen in all different sizes, with most government institutions and shopping centres having quite large ones, while poorer familial dwellings feature smaller ones.

To pay respect to a phi house, many people burn 9 incense sticks while praying for good luck. The number 9 is considered lucky in Thailand. If invited to stay overnight at a Thai home, it is customary to ask the spirits for sweet dreams and a blessing in the form of a prayer. And, it doesn’t hurt to keep any perceived bad luck out by stopping by to say hello to the ghosts that occupy the land, reminding them that you are staying only temporarily. Heeding to this advice could help you avoid what could happen if you ignore the potentially ominous presence that Thais believe occupies the beautifully detailed houses that are not adorning the property by mistake.