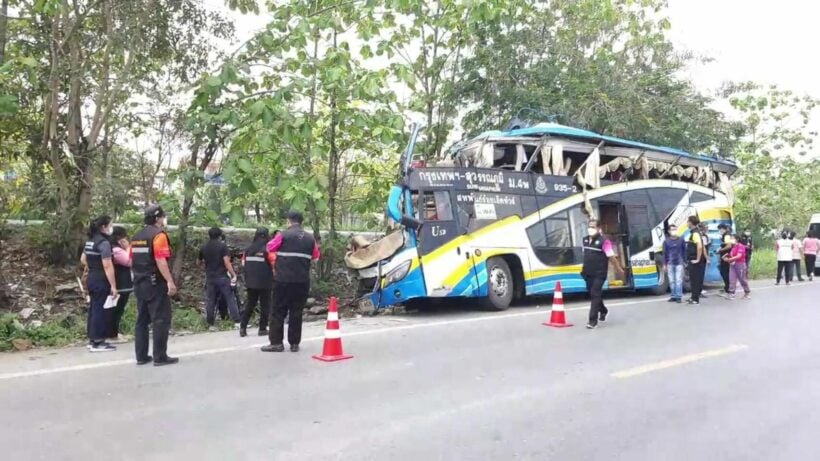 The bus driver in the fatal accident where eight passengers died was reportedly high on methamphetamine, also known as “ya ba” meaning “crazy drug.” Dashcam footage from a nearby vehicle shows the double-decker bus crashing into a concrete supporting pillar of an overhead bridge, ripping the right side of the bus. More than 20 people were injured.

Drug tests for one of the two drivers came back positive for methamphetamine. Reports in Thai media say the driver, 30 year old Narinsart Hongsa, confessed to using the illicit drug while driving. Narinsart says he started his shift at Nakhon Ratchasima’s Bus Terminal, driving the Bangkok – Suwannaphum bus was operated by the Transport Company. He says he was driving at 89 kilometres per hour in the neighbouring province Saraburi when he drifted off, causing the bus to hit the pillar on Mittraphap Road.

According to the officers from Mueng Saraburi Police Station, the driver was charged with reckless driving causing death and using drug category 1 while servicing a vehicle. He was now in custody for further prosecution and would be taken to court tomorrow.

HiuMak
16 hours ago, Thaiger said: The bus driver in the fatal accident where eight passengers died was reportedly high on methamphetamine, also known as “ya ba” meaning “crazy drug.” Dashcam footage from a nearby vehicle shows the double-decker bus crashing…

Soidog
7 hours ago, JamesR said: True, but we have to have a few drinks first so we fit in. (joke). Driving in Thailand is great fun. Normally the official taxi company from Phuket Airport to Kathu is great, I have…

DoUKnowWhoIAm
10 minutes ago, Soidog said: But there are simply too many in a society that behave like totally selfish C#@ts to deserve this false label. And this Dr Jekyl&Mr Hyde phenomenon, very polite and modest when face to face, but…

Transam
21 minutes ago, DoUKnowWhoIAm said: And this Dr Jekyl&Mr Hyde phenomenon, very polite and modest when face to face, but in their Benz they turn into monsters. And even in a Nissan shed.....😯

Soidog
42 minutes ago, DoUKnowWhoIAm said: And this Dr Jekyl&Mr Hyde phenomenon, very polite and modest when face to face, but in their Benz they turn into monsters. Yes, I’ve tired to understand what drives this attitude over the years and…