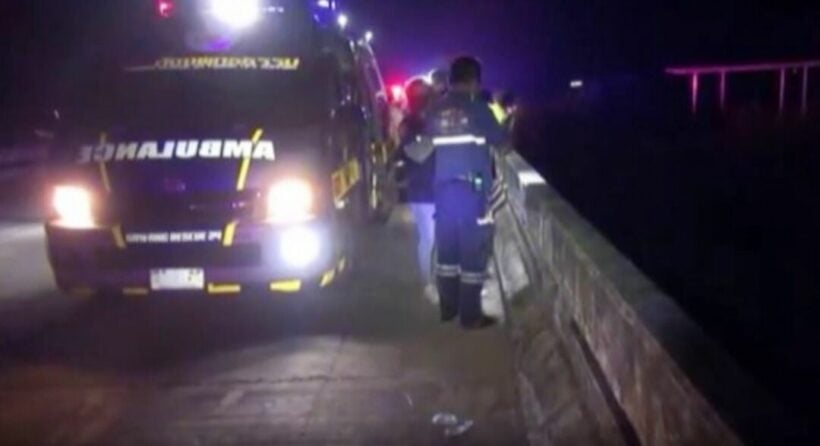 Another GPS horror story occurred this morning when 2 women driving home for the Songkran holiday ended up trapped in their sinking car in a canal in Prachin Buri province, northeast Thailand. Their GPS navigation system led them off the edge of the road, causing their car to drop 10 metres and land in a drainage canal. The women managed to escape the car just in time.

At around 12:30am this morning, officers from Kabinburi police station received a report of a car sinking with people trapped inside. By the time the rescue team arrived, 30 year old Poonika Jittham and her 23 year old passenger Monrudee Supawong had managed to escape from the sinking black Toyata Yaris and were stuck in the canal.

The rescue team scaled down the canal’s steep walls and managed to pull both women out of the water. Both women were cold and shaking so the rescue team took them to Kabinburi Hospital for a health check.

The incident happened around a sharp, unlit bend on a bypass road in Kabin Buri District. A local reporter said the road had no lights due to current construction work. The bend did not have signs to warn drivers of the sharp curve and steep drop nor any metal barricades to prevent cars falling off the edge. According to a local reporter, the bend used to have signs and barricades but they were allegedly stolen.

The relevant agencies have been informed and will implement lights, signs and barricades at the bend in the road to prevent such an incident from happening again.

The driver said she was driving to Khon Kaen to celebrate the Songkran holiday in her hometown when her maps software directed her car off the road.

Last month, a driver focused on his GPS maps accidentally drove his car into a canal in Korat. In January, a man’s GPS led him into a pond in Chon Buri, completely sinking his car.

Zig
from brake failure to GPS malfunctions..the Thais are creative!

Shorter quarantine times proposed for Thailand. From 7 days down to…?