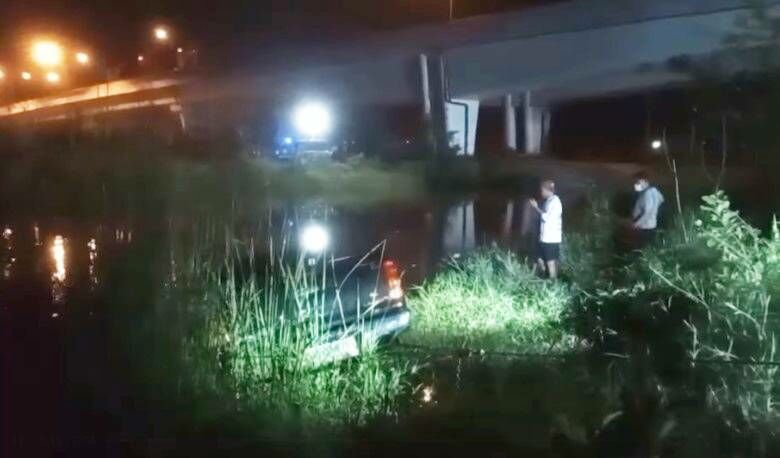 A driver focused on the GPS accidentally drove into a canal, sinking his pick-up truck. The driver and the other four passengers managed to safely get out of the vehicle. The driver says he was in an area that he wasn’t familiar with in the northeastern province Nakhon Ratchasima, also known as Korat. With his eyes focused more on the GPS than the road, he accidentally drove into the canal.

The 39 year old driver Manon shared with the Thai media that he and his family were travelling back home after visiting friends in Nakhon Ratchasima. He decided to use a GPS because it was dark, and he wasn’t familiar with the route. At one point, he was supposed to make a U-turn, but the GPS told him to go straight. He followed the GPS and accidentally drove his car into the La Boriboon Canal.

The police from Jor Hor Police Station and rescuers visited the scene and brought the car up. The car was destroyed at its front, but it was lucky that no one got injured from the accident.

A similar scenario happened before in Chon Buri, where the man focused too much on the GPS and accidentally sunk his car 15-metre deep into a pond.

joseph
OOps, misread "At one point, he was supposed to make a U-turn, but the GPS told him to go straight". The GPS didn't tell him to make a U turn, he was just supposed to? This of course makes the…
Malc-Thai
Amazing! always an excuse for an accident in Thailand.. its never their own stupidity!
HiuMak
Must be a U2 GPS..."I still haven't found what i am looking for"

Guest1
23 hours ago, joseph said: If my GPS instructed me to make a U turn I would have to wonder about previous instructions. Oh, yeah it happened again! Joseph, this can happen, on roads with u-turns, instead of turn right…