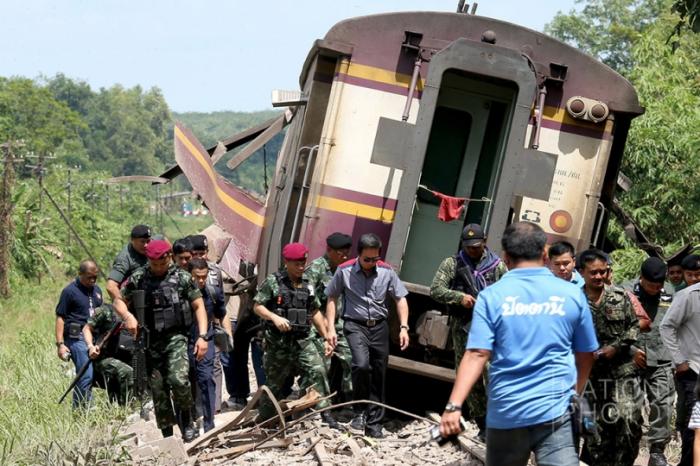 Trains operating in Pattani, Yala and Narathiwat have been suspended for 10 days after another bomb exploded on the railway line on Friday.

The State Railway of Thailand (SRT) ordered the temporary suspension of train services to the three southernmost provinces in the country after the bomb went off on the tracks in Pattani.

Manop Muenpreecha, chief of Tanyongmas train station in Narathiwat, said his station alone would lose revenue of at least 30,000 baht a day due to the suspension of rail services. The loss of revenue for the entire region was not revealed.

Travelling by train is a regular mode of transport for residents here, he said, but parents would now have to rent a car to take their children to school.

Yala train station, which usually serves about 3,000 passengers a day, wore a deserted look the day after the bombing.

The attack killed one railway official and wounded three others.

The blast led to the derailment of the train and the rear carriage was severely damaged. The local train was leaving Sungai Kolok district in Narathiwat and heading for Hat Yai in Songkhla province when the explosion occurred.

Officials said the train had been targeted by insurgents, who have orchestrated violence throughout the region since early 2004. More than 6,500 people have been killed since then.

Nobody claimed responsibility for the attack on Saturday but Pattani provincial police chief Maj Gen Thanogsak Wangsupha said militants led by Seri Taemamu might be responsible for the attack.

Authorities had their names on a watchlist but the officer declined to give further details. He said officials were working on the case and would hunt for them.

The talks in Malaysia made little progress as both sides just agreed in principle on the terms of reference for the peace process but did not make any agreement in written form. This action has raised suspicion among observers as to whether or not both sides really want to restore peace.

MARA Patani, an umbrella group of long-standing Malay separatist organizations in the Muslim-majority southern border provinces, established contact with the authorities last year to get a peace process started.

The military government under Prime Minister Gen Prayuth Chan-o-cha was reluctant to recognize the role of the group and doubts if it really represents militants operating on the ground or has any capacity to control them.

Meanwhile, some analysts said MARA Patani also did not want to negotiate with the military government, which is due to leave office after an election late next year. This has caused uncertainty about the peace process.

However, with the junta showing an intention to stay in power longer and the possibility of Gen Prayuth retaining power after the election, the MARA Patani group had no choice but to maintain the momentum of the talks in Kuala Lumpur, an observer said.

Despite dispatching senior officer General Aksara Kerdphol to the talks, Gen Prayuth said his government would not accept any conditions set by the group to initiate talks unless peace was restored.

Another observer said the meeting in Malaysia at the end of August yielded only one thing – that both sides would continue their contact.