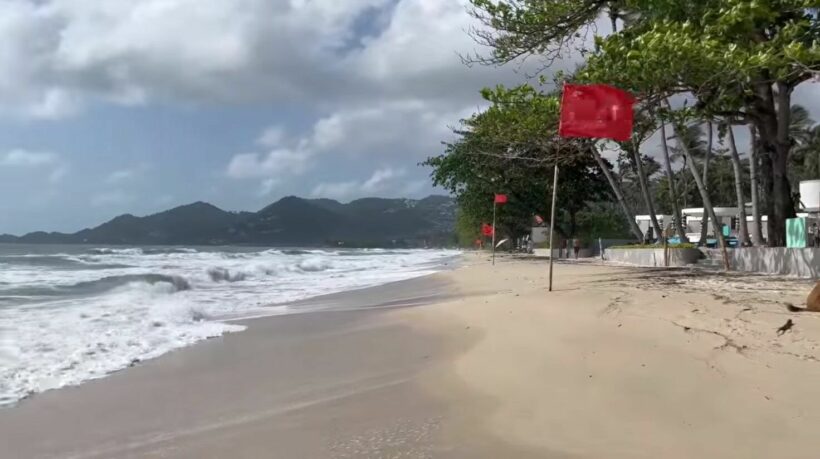 Four Thai tourists ignored a red flag warning on the beach and went swimming anyway in strong waves at Chawaeng Beach of Koh Samui in the southern province of Surat Thani on Wednesday. One person drowned, but four others survived. Staff from a jet ski rental business on the beach reported that one foreigner was also saved not long before an incident involving Thai tourists happened.

Yesterday, Koh Samui’s mayor, Chayapon Intharasupa, said he received a report of four Thai tourists who were about to drown at Chawaeng Beach. The rescue team and local jet ski riders managed to bring all of them ashore. Three women and one man were sent to a hospital. All of the women were reportedly in good condition, but the man, Jakkapan Boonchanya, was in critical condition and couldn’t make it.

The news comes after the Thai Meteorological Department this week issued a 24-hour stormy weather warning for Phuket, Krabi, Trang, Satun and Phang Ng, on Tuesday while a large storm front blew in from the Andaman Sea. Winds ranging from 15 to 30 kilometers an hour and heavy to very heavy rain was predicted to cover about 70 percent of the coastal area, as well as thunderstorms with waves 2 metres high. Red flags were placed on beaches throughout the area and owners of smaller vessels were advised to pull their ships ashore.

The tourists’ family members shared that the group had swam far from the beach and gotten hit by a strong wave. They tried to swim back to the shore but couldn’t. So they screamed and asked for help from the jet ski riders nearby, and the jet ski riders went out with a boat to bring them back in.

The staff of a jet ski rental business nearby shared with Thai media that many tourists, both Thai and foreign, had drowned at the beach from the strong wind and waves, as well as deep water near the beach. He said there are often red flags warnings, but many tourists ignore them.

In addition to the incident involving the Thais groups, he said there was another rescue earlier in the day. The victim was a foreigner, but he was lucky to be saved by a jet ski rider nearby. He said he also warned tourists not to go swimming, but many had complained to him, insisting their swimming skills were strong enough.

Meanwhile, Koh Samui’s mayor has also warned all tourists not to ignore red flags and other warnings. He also urged locals and shop owners along the beach to help take care of tourists to prevent similar situations from happening again in the future.

DoUKnowWhoIAm
57 minutes ago, Thaiger said: He said there are often red flags warnings, but many tourists ignore them. They mightve mistaken them for Chinese welcoming flags?

Poolie
32 minutes ago, DoUKnowWhoIAm said: They mightve mistaken them for Chinese welcoming flags? All Chinese flags are welcoming. 😉

ThaiEyes
Red flags coupled with inexperienced swimmers is likely. But gee, the PM told all Thais to learn how to swim, so that will fix everything of course. Too bad the guy died…

Poolie
1 minute ago, ThaiEyes said: Red flags coupled with inexperienced swimmers is likely. But gee, the PM told all Thais to learn how to swim, so that will fix everything of course. Too bad the guy died… Of course everybody…