The fallout from July’s tragic boat accident are just now starting to bite as tourists, who would have been about to make a booking around the time the accident happened, decided to book an alternate holiday destination instead. Despite the bravado and PR exercises, many Thai business people are secretly worried about the big drop-off in numbers. The drop in Chinese tourist numbers is the first real dent in what’s otherwise been a rise and rise in number over the past five years.

Tom Tuoy from the South China Morning Post has written an article which delves into the current Chinese mind-set and the things that are concerning them about travel in Thailand – a long time favourite for the growing outward-bound Chinese tourist market.

Chinese tourists make up a quarter of Thailand’s visitors, but after the handling of the recent boat accident in which 47 Chinese tourists died, and with the kingdom’s lax attitude to safety, authorities need to act quickly and decisively to retain Thailand’s tourism revenue.

The high profile international rescue at Tham Luang took a lot of attention away from what would have otherwise been a massive international story. Many media commentators freely admit that Phuket dodged a news bullet when the reporting wasn’t as intense as it would have been in such a disaster.

The SCMP article says that the boat accident that claimed the lives of 47 Chinese tourists last month is shining a stark spotlight on the Kingdom’s poor safety record and spread unease among tourism authorities and the government.

Two weeks ago The Thaiger reported that the Thai Ministry of Tourism and Sports had revised down its forecast for the number of Chinese arrivals for the second half of 2018 by 670,000, to 5.1 million, but insisted that Thailand would still achieve its target of 11 million Chinese tourists in 2018.

Chinese tourists account for around 25% of the country’s 35 million tourist visitors (2017 statistics from the Tourism Authority of Thailand). That number was expected to swell to 40 million, a staggering 25% rise in just three years. 20 million tourists have already visited Thailand in the first six months of 2018.

But even eternally upbeat accommodation association leaders were forced into facing the harsh reality.

“The booking rate has fallen sharply by 80 per cent to 90 per cent at Patong beach, and by 50 per cent across the province [Phuket] after the boat disaster.”

Phuket’s weekly paper, The Phuket News, published a withering editorial “The Deadly Face of Shame” asking the question “Just how bad can Thailand handle a disaster situation?” The article tore shreds off incompetent emergency operations in the critical hours and days following the sinking of Phoenix. The article then notes the bad taste charm offensive that followed… “repeated explanations of how to claim your loved one’s body” and the “despicable handing out of ‘commiseration gift baskets’ to those overwhelmed with grief at the hospitals”.

The Thaiger wrote an opinion piece asking even more questions…

Who ticked off on the design of ‘Phoenix’ – that the boat would be suitable for carrying up to 100 passengers and crew, safely? Who checked the construction of the boat as it was being built, and then when it was completed and launched to ensure that all the requirements of the engine, construction, engineering, equipment and safety equipment were met? Who was responsible for the qualifications of the Captain and crew and their fitness to handle a vessel of this size with up to 100 passengers? What safety training did the crew receive to handle an emergency? And who ticked off on their certification of ‘Phoenix’ – the final paperwork allowing to operate at sea as a tour boat? 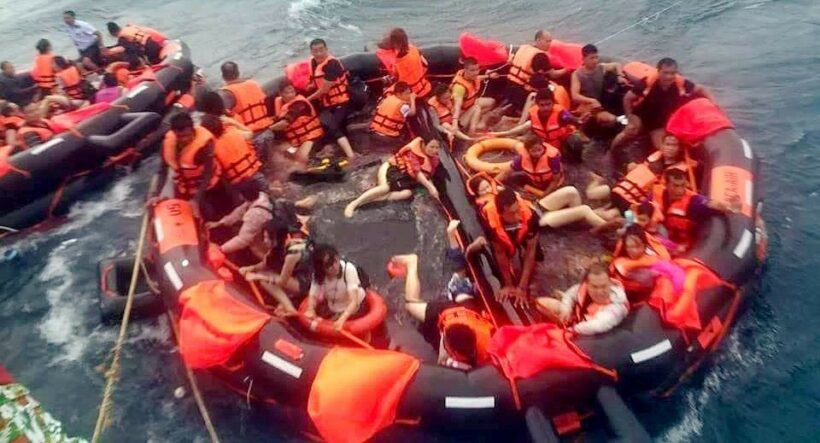 The Thai PM Prayuth Chan-o-cha, like a deer in the headlights, called for an “urgent safety review”. The new Minister of Tourism and Sports Weerasak Kowsurat, followed on… “we must have safety and management procedures in place and leave no room for compromise. If we become known as a country that does not compromise on safety, it will become another plus point for us to be recognised for not being lax in our standards”.

Clearly there’s plenty of work to be done in changing that perception.

More recently, it was announced that five airports across the country have opened special lanes with Mandarin-speaking immigration officials in an attempt to make the process more efficient – and presumably win back the hearts and minds of Chinese tourists.

Figures from the Ministry of Tourism and Sports show the number of foreign tourist related accidents in Thailand in 2017 increased by 25.12 per cent year on year, to 936, including 265 deaths. Without providing a specific number, the ministry said most of the deaths were Chinese nationals.

The Phoenix was carrying 105 people – mostly Chinese – when it faltered, capsized and sank in rough seas while returning from a snorkeling trip south-west of Phuket. It was among three vessels that headed out to sea that day in spite of a weather warnings.