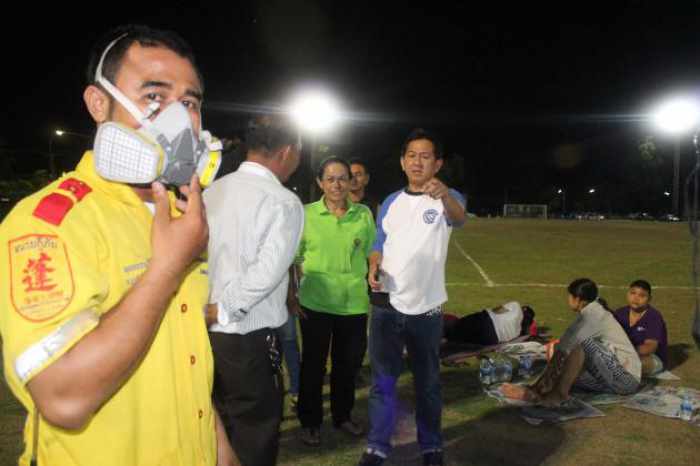 PHUKET: Thousands of people were forced to evacuate their homes in Rayong’s Ban Chang district shortly past midnight and spend the night on a football pitch after smelling something like toxic gas.

Children and the elderly suffered eye irritation and retching from what they suspected was a gas leak. Two people were sent to a hospital for vomiting and nausea and have already been discharged.

The worst hit communities were the Prachummitr, Lor Kwien and Pandin Thai housing estates near the Asia Industrial Estate.

Pratheep Aengchuan, director of the nearby Map Ta Phut Industrial Estate, said the odour smelled like chlorine and a bushfire.

An investigation of the four industrial parks in the area found no source of the smell. A factory outside an industrial estate that was suspected of spreading the foul odour was found closed about a week ago for maintenance.

Pratheep said officials would check the factory to find the source of the stench.

Samran Sanandang, kamnan of Tambon Ban Chang, said people had first detected the bad odour at 9pm on Saturday and it became so intolerable that they decided to leave their homes.

Police told to get better results; target quality, not quantity