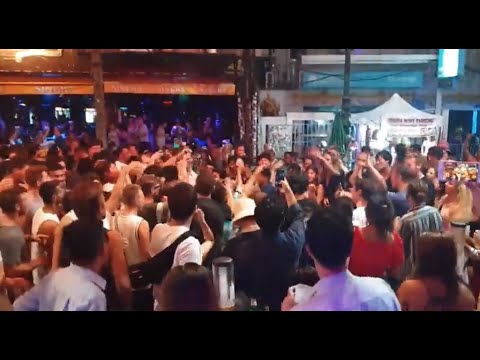 5 more imported cases in Thailand today. 2 of the newly infected patients are from Egypt, 3 from Qatar. All were detected whilst in quarantine in Chon Buri. None of them were displaying any obvious symptoms of the disease.

Well, there’s some good news and there’s some bad news if you’re the owner of an entertainment venue in Thailand. You CAN re-open… soon. BUT, the CCSA has put together a list of 22 requirements you’ll have to meet when you re-open your doors.

Not surprisingly the owners and representatives are unhappy about the long list of encumbrances on venues who will re-open under the new phase 5 guidelines. The list of rules is being submitted to the Centre for Covid-19 Situation Administration this Friday.

Here’s some of the main restrictions, among the long list…

• Restrict the number of customers

• Groups of people sitting together – maximum 5. They will have to sit 1 metre away from each other.

• At least 2 metres between tables, or install barriers

• No singing or dancing

• Drinks in glasses only, not bottles

• No competitions or group activities, including pool and darts

Last week the country’s musicians and entertainers pleaded with the the government to allow them to return to work. They told officials that they were in dire financial straits.

An 18 year old Pattaya driver says a wet road made him lose control of his truck, causing it to veer off the road and lodge firmly under a highway overpass.

The incident took place around 4pm yesterday at an overpass on Sukhumvit Road, Pattaya City.

The driver escaped without any injuries, but his truck did not fare so well, becoming firmly wedged under the overpass. Mr. Sarayut says he lost control at a bend in the road, due to the fact it was wet from recent rain. Pattaya police are now checking CCTV to see if speed was a factor in the incident.

Authorities say the business had around 10,000 borrowers and over 100 million baht in circulation. Police started investigating the online scam after receiving complaints about the company demanding people pay high interest rates. Some reported that they were harassed and threatened on the phone to pay interest rates of 22 – 28%.

The 5 people arrested were all Chinese nationals.

A woman allegedly stole 33 million baht in government funds over the course of a year, using some of it support her alleged gambling addiction.

The 28 year old, who worked in the finance and accounting section of the Prachuap Khiri Khan provincial offices, was arrested on charges of misappropriation and forging government documents.

Hoythong allegedly forged signatures of authorised personnel and transferred money allocated for drought relief to a relative’s account, posing it as payments for contractors working on various projects.

An internal investigation found that she had been stealing money since June 2019 and somehow it went unnoticed.

A talented teenager in the north-eastern province of Kalasin has taken to painting landscapes of his local area and selling them to earn money for his architecture course.

18 year old Krittamet , known as “Earth”, dreams of being an architect, but the prohibitively expensive fees – about 600,000 baht in total – put that beyond his reach. Earth’s mother died 2 years ago and he now lives with his grandparents.

He started out by selling his work to neighbours for as little as 20 or 50 baht.

The arrival of the Covid-19 lock-down provided him with extra time to focus on his art, reproducing more of his hometown’s rural landscapes.

The young man says a student loan is out of the question as he couldn’t afford the repayments. Instead, he is relying on his talent with a paintbrush.

Earth is also hoping to use his newfound success to shine a light on the environmental challenges faced by Kalasin, and hopes to build an environmentally-friendly hut in which to teach others how to paint while caring for the environment.