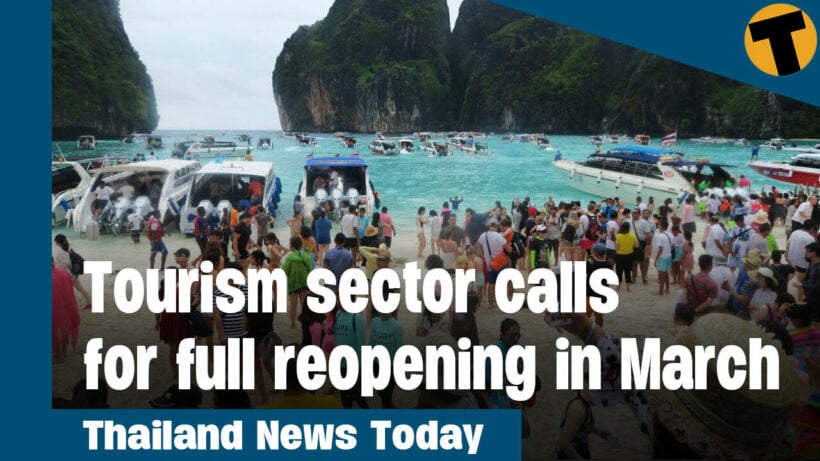 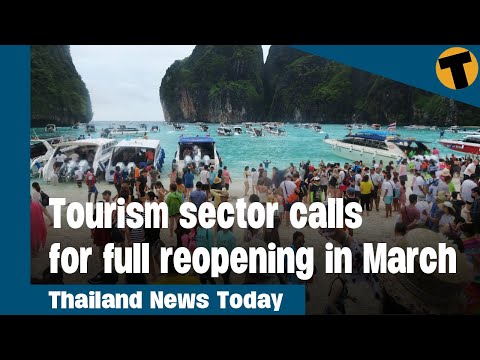 Tourism operators have written an open letter to PM Prayut Chan-o-cha and other government officials, calling for the country to be fully re-opened to foreign visitors from March.

It says Thailand needs to further relax Covid-19 restrictions for tourists now, or else it may lose the ability to compete with other nations.

The Philippines recently lifted the requirement for PCR testing on arrival for foreign visitors, while Vietnam has confirmed it will re-open to foreign tourism in March.

Tourism added that April is an important month for tourism, as Easter is a popular time for foreigners to travel and many come to Thailand for the Songkran holiday.

The letter goes on to cite the low number of infections found during PCR tests on overseas arrivals. Using data from Phuket between February 1 and 13, the letter states that the infection rate among overseas arrivals was 2% on day 1 and 3% on day 5.

“Still, the letter says, these infected tourists have apparently not caused any burden on the country’s healthcare system as their infection rate is very close to that of the common flu.”

The Thai Hotels Association says the government must drop the PCR testing requirement for foreign visitors if there’s going to be any hope of salvaging the country’s tourism industry.

THA president Marisa Sukosol Nunbhakdi says demand for the revamped Test & Go scheme is lower now than when it was first launched in November, due to the high season coming to an end soon. However, she says the new requirement for a second PCR test on day 5 is also a factor, adding that tourism will surely face further collapse if the testing requirement is not relaxed.

The THA boss was addressing attendees at a Bangkok Post-conference when she pointed out that Thailand needs to remain competitive as other countries such as the Philippines, Vietnam, Cambodia, and Australia all open up with fewer entry restrictions. In Europe, several countries have dropped the need for PCR testing prior to entry and the Maldives, which has also ditched the PCR testing requirement, enjoyed tourism numbers in 2021 that surpassed those of 2019.

Marisa went on to say the additional requirements mean many hotels have had to hire extra staff. They need an occupancy rate of 45% just to break even, compared to occupancy of 30 – 40% in pre-pandemic times. However, if the government would relax some of the entry requirements for overseas visitors, she says hotels could reach occupancy rates of 50%.

Also speaking at the conference was the chief economist from CIMB Thai Bank Amorntep, who believes Thailand’s tourism sector will lag behind the overall economy during the post covid recovery.

He believes that although the Thai economy will reach the same level as before the pandemic in the first quarter of next year, the country’s tourism recovery will take more time. Hotels targeting high-end customers will recover first, while those below 4 stars and tour agencies would take longer to rebound.

In response to public sentiment calling for the easing of restrictions, Thailand’s Public Health Minister says the country needs to balance economic recovery with the need to protect public health.

Anutin Charnvirakul said Covid infection numbers are currently soaring as a result of the highly-contagious Omicron variant, but Anutin expects the infection rate to start dropping soon. Once that happens, he says the government will review measures, taking into account the Covid situation globally.

The health minister also acknowledges that most deaths in Omicron patients were the result of other health conditions or because they were unvaccinated. He says there are still enough hospital beds to accommodate those who are seriously ill, while asymptomatic patients or those with only mild symptoms can self-isolate at home.

The health minister also urged those who have not yet been inoculated against Covid to get vaccinated, adding that there are now enough vaccines to administer booster shots for all Thais and expats.

So far, more than 120 million vaccine doses have been administered to Thais and expats. Some 75% of the population received their first shots, and 26% got their booster shots. About 90 million more vaccine doses will be procured this year.

The Thailand Privilege Card company, which operates the Thailand Elite Visa scheme, has launched a new programme aimed at wealthy foreigners in need of a work permit.

For an investment of ONLY 30 million baht, the scheme, called the Flexible Plus program, will allow eligible (a.k.a, rich) foreigners to obtain a work permit. The move is aimed at attracting investors and boosting Thailand’s devastated economy.

According to a Nation Thailand report, the proposal was approved by Cabinet in October, and investors accepted through the Flexible Plus Programme will also be given the right to work in the kingdom.

The program is also open to existing holders of the Thailand Elite Visa that have either 5 or 10 years left on their visas, depending on their program. In all cases, 30 million baht in investment is required.

The programme is primarily aimed at investors from China, Hong Kong, Japan, the UK, France, the US, Singapore, and Russia.

Nation Thailand reports that there are currently over 16,000 members enrolled in Thailand Privilege Card programmes.

The Thai government plans to evacuate its citizens from Ukraine in the event of an escalation in tensions with Russia.

According to a report, there are around 230 Thai nationals living in Ukraine. Thani Sangrat from Thailand’s Foreign Ministry says officials at the Thai embassy in Poland have laid out a plan for their safe evacuation if necessary.

The embassy has created a dedicated Line group for the Thai citizens and has asked for the cooperation of the Polish and Ukrainian governments in the event of an emergency evacuation. The embassy issued a warning to Thais on Sunday, urging them to avoid all travel to Ukraine. Thailand’s ambassador to Poland has stated that the western Ukrainian city of Lviv could be used to move Thais out of the country and into Poland.

Meanwhile, in Bangkok, police have ramped up security in the areas around the Ukrainian and Russian embassies. The Metropolitan Police Bureau has confirmed that Special Branch officers, patrol officers, and other security agencies are monitoring both embassies and residences.

A Move Forward MP has accused the government of covering up the spread of African Swine Fever in a parliamentary debate yesterday.

The MP, Padipat, said the swine fever spread across the country in 2020 as a direct result of the government covering it up when it first hit in 2019.

When the disease was first discovered, 300,000 pigs died either from the disease or from farmers culling them to stop the disease from spreading. In the past, Thai authorities said the deaths were due to other reasons.

Padipat said veterinary deans had tested the dead pigs and found African Swine Fever, proving the authorities wrong. In January, the deputy-general of Thailand’s Department of Livestock Development insisted the department had followed every procedure and “couldn’t have” covered up the spread of ASF.

Meanwhile, pork prices soared throughout the country as the number of breeding pigs in the market dropped from 1.1 million before the outbreak, to 660,000. The deputy-general said the situation would take eight to 12 months to solve because local piglets have to be at least six months old before they can be slaughtered.

He added that the government’s crackdown on pork hoarding in frozen storage facilities was just a “charade” to deceive the Thai people, who he said haven’t been told the truth about ASF spreading.

Fundok
2 hours ago, Burapha said: As soon as they give the go ahead I will book, but I need to give work four weeks notice and i cant book holidays until im sure of the situation, and that's cutting it…
farang
and i love the b/s statement about  16,000  tourtist have dropped 32 million baht just to get easy pass and work permit to thailand. who falls for this b/s besides chanachot??? do you know thats  one million usd?$1,000,000. thats enough…