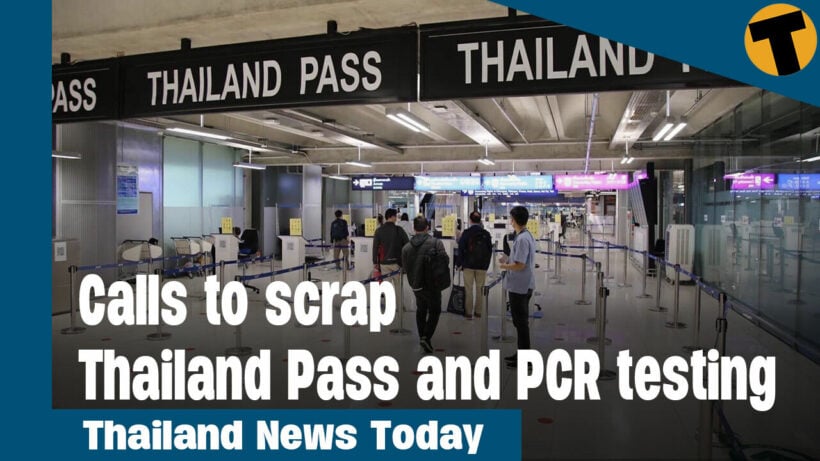 Key figures in Thailand’s tourism industry have renewed their calls for the Thailand Pass and PCR testing on arrival to be scrapped.

Speaking at the Thailand Tourism Forum in Bangkok yesterday, the chairman of global hotel operator Minor International, renewed his call for the government to ditch the Thailand Pass system. Bill Heinecke has been vocal on issues affecting tourism’s recovery for some time, penning an open letter to PM Prayut Chan-o-cha at the start of the year, urging him to reinstate the suspended Test & Go entry scheme.

Addressing forum attendees yesterday, Heinecke said the government must now lift all restrictions on international visitors immediately if Thailand is to remain competitive. Thailand was the first country in the region to re-open its borders but the near-total lifting of restrictions in other countries now means it’s lagging behind. Neighbouring Cambodia has completely opened up, as have the Philippines, the Middle East, many European countries, and the UK and US.

Heinecke has warned that the government’s aim of attracting 10 million tourists this year is in jeopardy if the current rules remain. Instead, Thailand risks only seeing 10% of pre-pandemic numbers, or around 4 million. Despite a recently agreed travel bubble between India and Thailand, Heinecke points out that there are still no flights between the 2 countries. Adding to the existing challenges is Russia’s invasion of Ukraine, which Heinecke says has led to cancellations from all over the world.

The president of the Thai Hotels Association also expressed her concern for the industry if the current requirement for PCR testing on arrival remains. Marisa Sukosol Nunbhakdi says the number of infected international arrivals is negligible when compared to cases of community transmission. She says if the government really is serious about encouraging its citizens to live with the virus, which it plans to declare endemic by June, it needs to abolish the Test & Go entry scheme and allow people to arrive with proof of vaccination and a pre-departure negative PCR test result.

An autopsy report shows that TV actress Nida “Tangmo” Patcharaveerapong had indeed died from drowning.
At a press conference, a pathologist at the Police General Hospital’s Institute of Forensic Medicine told reporters that they couldn’t determine if Tangmo had urinated before drowning, as was claimed by others on the same speedboat.

Forensic examiners also could not determine if the actress had fallen in or if it appeared she had been pushed. The deep, 30-centimetre long cut found on her leg was possibly caused by the boat’s propeller and may have cut into a major artery, limiting Tangmo’s capacity to help herself.

The forensic expert said that sand was found in Tangmo’s lungs, evidence that she was still breathing when she fell into the river.
Investigators are still running tests to see if there are traces of urine on the back of the speedboat or on Tangmo’s bodysuit.

Border police in Australia have uncovered 55 Australian dollars million worth of smuggled methamphetamine and heroin in a shipment from Thailand.

According to a report from the Australian Associated Press. The shipment was concealed in boxes of green tea and magnets and discovered at Melbourne Airport.

The 27 boxes had been shipped from Thailand on February 19 and came to light when x-rays indicated abnormalities with the boxes. Customs officials carried out further tests on the shipment and discovered the narcotics. The Australian Federal Police force has now launched an investigation.

Drug trafficking operations between Thailand and Australia are a regular occurrence with a number of seizures in recent months. In November of last year, 2 Australian men who allegedly conspired to smuggle more than 300 kilograms of heroin from Thailand to their home country were arrested by Australian Federal Police.

The arrests were linked to a July 2021 seizure by Thai customs officials at a port in Chon Buri. Officers searched an outgoing sea cargo container destined for Queensland and found 314 kilograms of heroin hidden in paint drums.

In December 2021, officials in Thailand found 1.2-billion-baht worth of crystal meth being shipped out of the kingdom and destined for Australia. The 193 kilograms of drugs were concealed in punching bags normally used for boxing.

Following a December investigation by Thomson Reuters Foundation about the abuse of Thai prisoners forced to make fishing nets, the investigation found that prison guards beat prisoners who did not meet certain targets and disallowed them to shower.

Prisoners were also not paid minimum wage, and sometimes not paid at all. On February, 31 Thai and international rights groups petitioned for the US to halt the purchase of nets made by two major companies that relied on Thai prison labour.

Now, Thailand’s Department of Corrections has sent letters to 143 prisons calling on them to stop fishing net production, and all other jobs that don’t improve prisoners’ work skills. All prisons must now declare they have stopped forcing prisoners to work for low pay. They must also obey UN Standard Minimum Rules for the Treatment of Prisoners. From now on, prisoners can choose what type of training they get, provided by the corrections department and the Labour Ministry. There are about 260,000 prisoners in Thailand.

The two fishing net companies in question are Khon Kaen Fishing Net and Dechapanich Fishing Net. KKF said it would cut ties with any prisons found using forced labour. A Khon Kaen Fishing Net official told Reuters he feared a US ban would cause job losses in Thailand. He said there might only be one or two prisons that acted inappropriately, and the company has asked Thailand’s Corrections Department to come up with a standard pay rate for net making prisoners. Dechapanich did not respond to Reuters’s multiple requests for comment.

The Tourism Authority of Thailand greeted Saudi tourist arrivals with traditional Thai performances and a water salute on Monday. The flight was the first direct flight to Thailand from Saudi Arabia in 32 years.

This flight symbolised the recent reconciliation between the two countries after decades of frosty relations following the Blue Diamond Affair of 1989.

Statistics say just over 36,000 Saudi tourists arrived in Thailand in 2019, and Thailand made about 3.2 million baht. TAT’s deputy governor said direct flights will help promote tourism to Thailand, and expand tourist markets in Saudi Arabia, Europe, and the Middle East.

He also said it will allow tourists to conveniently transfer to other countries. TAT plans a new marketing campaign for this year called “Visit Thailand Year 2022: Amazing New Chapters”. The campaign will promote three main types of tourism in Thailand, consisting of Medical tourism, beaches, and shopping.

In the new campaign, TAT will exchange tourism promotions by focusing on the ease of travelling. TAT’s deputy governor said Saudi Airlines now has flights to Thailand per week on Mondays, Wednesdays, and Fridays. The first flight this Monday carried 71 people.

Officers from the Than Sadet National Park on Koh Phang Ngan have rescued a group of 5 German tourists after they got lost yesterday while on a forest hike.

The 4 women and 1 man had been doing the Khao Rah, which takes hikers to the highest peak on the island when heavy rainfall caused them to get lost. A search party was formed when the group phoned the national park office and asked for help.

According to a report, police, administrative officials, and park rangers rallied to look for the tourists, starting at the trail to the Khao Ra viewpoint. The search party worked for an hour, shouting for the tourists until eventually, they heard the tourists shout back. The group was found near the Than Sadet waterfall.

A couple was arrested in Bangkok for allegedly running a fake travel agency advertising tour packages in the southern province Krabi off the Andaman coast. Reports say the couple had been doing the scam for seven years, scamming tourists out of a total of 100 million baht.

Tour packages with accommodation included were advertised on Facebook for costing 2,500 baht per person. The couple would allegedly ask tourists to transfer the package fee, but not offer the trip as promised. Some who lost money to the alleged scam contacted the Consumer Protection Police.
An arrest warrant was issued by Krabi Provincial Court and the couple was later arrested at their house in Bangkok.

Marc26
7 hours ago, riclag said: Never get tired of criticism! Some prospective travelers come to these forums to get a sense of what others think of the pros and cons of restricted travel. It would be a disgrace to deny…
HiuMak
now we are talking
Travel101
Great points. I'm all for the scrapping of The Thailand Pass and PCR testing. It's Endemic Time. Let's ACT Swiftly! I took my Waverunner around 360 - Koh Lan pathetically empty chairs. I viewed all resorts and beaches from the…
butterfly
27 minutes ago, Travel101 said: The upside: flawless traffic flow BKK - Pattaya, Rayon. Nice new wide highways - very few cars and exquisitely clean air! and you want to change that by opening up Thailand to mass tourism again? 😛

Cabra
1 hour ago, Travel101 said: The upside: flawless traffic flow BKK - Pattaya, Rayon. Nice new wide highways - very few cars and exquisitely clean air There is nothing flawless about BKK traffic flow, nor will the air ever be …