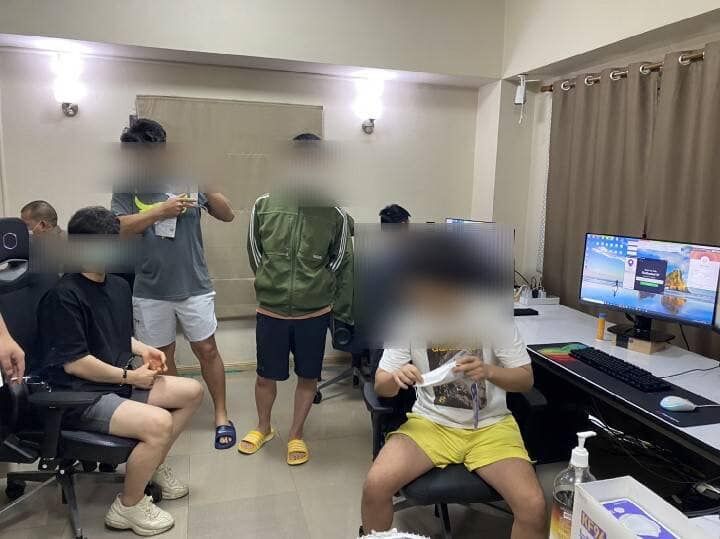 Thai police raided a home suspected of being the headquarters for an illegal gambling website that swindled more than 100 million baht from Korean victims. Officers arrested four South Korean men and a Thai woman who was renting the home in Samut Prakan, just southeast of Bangkok. The suspects face charges of organising, advertising, and inviting people to join gambling without permission.

The cyber police officers from Bang Kaew Police Station received a tip that a home was being used as a base for a gambling website. Officers raided the home and seized electronics said to be used to run the site. Altogether, police confiscated 10 computers, five internet routers, 10 smartphones, six luxury bags, a watch, and a tablet.

Four Korean men at the home were arrested. Police arrested a Thai woman at another house in the same area and seized two bank books, two computers, and a safe. She reportedly claimed that the evidence seized by police belonged to her boyfriend who was not arrested.

The Korean suspects allegedly told police that they were administrators for the site and would reach out to people online to start gambling on the site. They allegedly told officers they’ve been working for the site for two years and made 120,000 baht per month.

palooka
50 minutes ago, DoUKnowWhoIAm said: Now that's significant.. Originally probably 12 but the boys had to take a few home to the girlfriends etc. plus a watch or two and some cash for a night out. Four men a woman…

Guest1
1 hour ago, Thaiger said: Thai police raided a home suspected of being the headquarters for an illegal gambling site Zut alors, I was hoping for a Thailand made squid game reality show!
Vigo
Korean police complaint. These gambling dens do some terrible social damage.