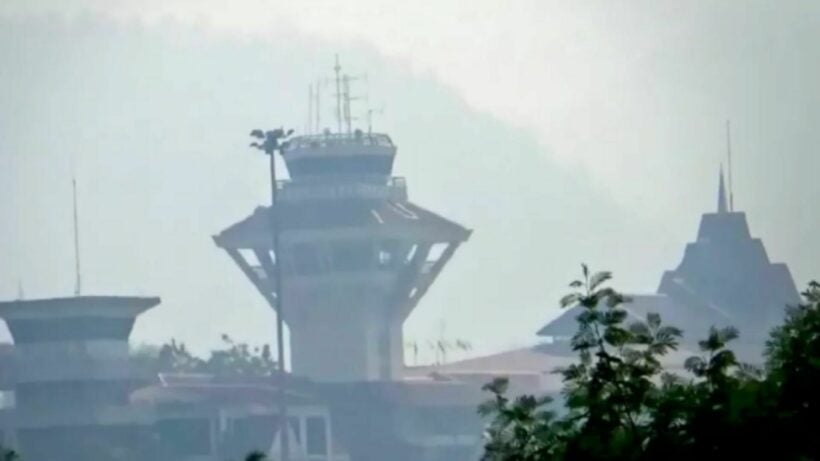 Due to poor visibility caused by haze above Mae Hong Son airport in nothern Thailand, a private plane flying the acting US ambassador this morning cancelled a landing and returned to Chiang Mai International Airport.

Smog has been a longstanding problem in northern Thailand and kicks up every year during burning season from February to April. Today, the local air pollution monitoring station recorded levels of PM2.5 at 98 micrograms per square cubic metre of air, over the safe threshold. The Meteorological Office recorded multiple hot spots in Northern regions, probably caused by weed burning and wildfires in Myanmar, leading to low vision and a larger level of PM2.5.

The clouds of smog were so thick this morning that the pilot flying the 9-seater Beechcraft King Air 200 carrying the ambassador chose to cancel the landing and return to Chiang Mai International Airport to wait for the sky to clear up. Visibility over the region was poor from 6am to 10 am, according to the Mae Hong Son Meteorological Office.

US Chargé d’Affaires Michael Heath was set to co-chair a ceremony with Mae Hong Song deputy governor to kick off a program to preserve historic coffins in a cave in the Pang Ma Pha area.

The acting ambassador ultimately postponed his trip to Mae Hong Son in favour of a trip to the Royal Thai Navy’s earthquake monitoring centre on Doi Suthep.

DoUKnowWhoIAm
14 minutes ago, Thaiger said: Smog has been a longstanding problem in northern Thailand Wasn't that banned last year? Sorry, stupid question.
CamPat
Great news. Perhaps this kind of smog is what the Russians need to smoke out Nato. The american ambassador obviously has never been in any war which in combat is full of smoke and loud noise. Pussy. Perhaps he's scare…

Guest1
Ja, about now is the best time, to visit the greater Chiang Mai area! <misinformation deleted>
Cathat
7 hours ago, CamPat said: Great news. Perhaps this kind of smog is what the Russians need to smoke out Nato. The american ambassador obviously has never been in any war which in combat is full of smoke and loud…