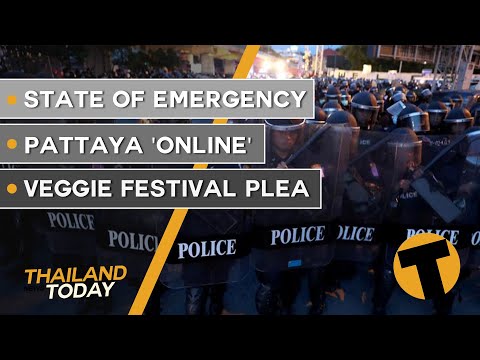 Bangkok in State of Emergency, protesters arrested, “vow to fight on”

Bangkok is now in a State of Emergency. The new decree was imposed at 4am in an effort by the Thai government to quell the growing support of the latest protest movement. The “State of Emergency” places a ban on gatherings of any more than 5 people.

The early morning announcement was the signal for 100s of crowd-control police in riot gear to move on the protesters who had been camped outside Government House. There were only a few hundred protesters still on site just before 5am as thousands had moved on after yesterday’s march and last night’s speeches and activities.

More than 20 people have now been arrested, including the protest organisers. Many more are currently detained awaiting further legal processes.

The government announced in their early morning decree that…. “It is extremely necessary to introduce an urgent measure to end this situation effectively and promptly to maintain peace and order.”

As a warning to social media users and news media, the announcement said…

At its peak, it is thought that yesterday’s protest had attracted up to 10,000 people.

Protesters “had no intention to block royal motorcade route”

Meanwhile, demonstrators at Government House claim they had no intention of blocking a royal motorcade, cited as one of the reasons for the State of Emergency and the police moving in to disperse the protest this morning.

Many say they were unaware that the motorcade would pass along the same route as their march. The Move Forward Party, the re-incarnation of the dissolved Future Forward Party, claim the anti-government demonstrators had no intention of impeding the motorcade. HM The King and Queen, and the young price, travelled at the head of a 200 metre-long royal motorcade making their way to a ceremony.

A statement from the Move Forward party says most demonstrators didn’t even know the motorcade would pass the rally site, and made no attempt to block the path.

The opposition party is condemning the declaration of a state of emergency and demand the government revoke it immediately.

Pattaya bar ladies use YouTube to make money during pandemic

Can’t visit the ladies in Pattaya? Just go to YouTube and type “Pattaya bar live” in the search bar. Any number of videos and live streams will come up from various bars in Pattaya. If you can’t go and see the bar girls, using technology, they can come to you… and your pocket.

Whilst the lockdowns and restrictions have heavily impacted Pattaya’s bar scene, many are now digitally reaching out to customers who aren’t even in Thailand.

Many bars now stream on YouTube with a link to a PayPal account to allow customers to buy the ladies a drink or even make a donation. So now they can love you long time, from a long way away.

A man who held a Phuket shopkeeper hostage at gunpoint has surrendered following a 4 hour stand-off with police. Nation Thailand reports that the incident occurred in the sub-district of Srissontorn last night.

Police say they were pursuing a group of teenagers over drug offences, when one of the suspects ran into a motorbike repair shop and taking a woman hostage at gunpoint.

After 4 hours of negotiation, the man put the gun down and was taken into custody. The woman was shaken but unharmed by the incident.

And while Phuket’s annual Vegetarian Festival was given the “okay” to move forward with plans, the event will need to abide by “new normal” rules to prevent the spread of the coronavirus.

So called “mah songs,” who often practice self-mutilation to enter a trance-like state and channel spirits, are being asked by the Phuket mayor to “limit the level of torturing.”

During street processions at the week-long festival, the mah songs walk for hours with any number of sharp, and sometimes larger, objects piercing their cheeks. The mayor pleaded in a radio interview yesterday…

“Mah song must try to limit the level of torturing they endure and display, and people must wear face masks at all times.”