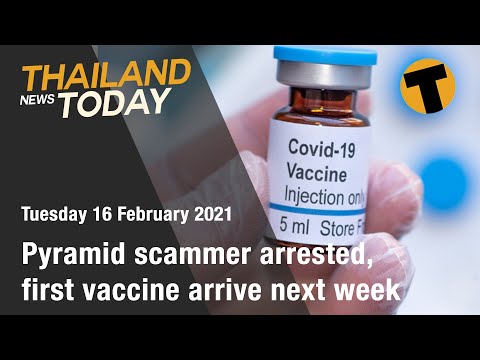 A 45 year old Thai woman, known as Jay Phet, has been arrested, along with several Burmese accomplices and nearly 400 of the trafficked migrants. She was arrested for acquiring illegal Burmese migrants, getting them over the border… undetected, and then sending them to the Central Seafood Markets along the coast of Samut Sakhon province, just south west of Bangkok.

She is being named as the key culprit behind the latest outbreak which was first detected on December 20.

Jay Phet and some of the alleged accomplices are now in detention at the Bang Kwang Central Prison in Bangkok.

The Pathum Thani Provincial Governor has ordered the lock down of two markets and nine commercial buildings until February 25. 221 people have now been found to be infected with Covid-19 since last Tuesday, February 9. The 2 markets are the Suchart and Pornpat markets.

Wet markets and adjacent commercial buildings in Tanya Buri, just north of Don Muang Airport, are now under complete lockdown… people can’t enter or leave the areas but everyone living inside the lockdown zones are being provided with food for the 9 day circuit breaker.

The Bureau of the Royal Household has sent 4 fully equipped test vehicles to help in the screening of the people inside the lock down zone. At this stage, over 2,000 people have been tested. A 600 bed field hospital is now set up to cope with any cases.

Police have arrested a 37 year old Dutch national in Phuket, who was allegedly involved in the SPM Shopping Mall pyramid scam that has defrauded thousands of people. Police say the man was an administrator on the Line app that was actively procuring new people to buy into the scam and invest their money. The Phuket police say they are still searching for 40 other suspected administrators.

Wesley Halbach was arrested over the weekend after several Phuket residents filed complaints with police, accusing Wesley of tricking them into sinking money into the web-based scam. People were getting paid to “click” on products as a positive rating to help boost SEO rankings.

Victims were told the more money they invested, the more money they would get back. But at the start of last week, money transfers didn’t go through and the Admin leaders of different branches in the pyramid started not returning messages.  Some members invested at least 1,000 baht while other invested around 200,000 baht.

Across Thailand, police say the number of victims could reach into the tens of thousands and have been contacted by some people saying they invested into the millions of baht.

Mr Halbach was charged with conducting an online scam and defrauding others. He was detained at Bangkok’s Suvarnabhumi Airport trying to flee the country. Police alleged that more than 100 million baht had already been transferred to his home country.

More than 600,000 migrant workers have registered with the Thailand Labour Ministry over the past month. Late last year, the Thai government announced migrants from Cambodia, Laos and Myanmar would be granted a 2 year work permit and health insurance. Registration with the ministry’s Department of Employment was open from January 15 until February 13.

The move follows the Covid-19 outbreak in Samut Sakhon, where thousands of migrant workers tested positive for the virus. The outbreak among the migrant community exposed Thailand’s problems with undocumented labour and human trafficking.

Thailand’s Public Health Minister, Anutin Charnvirakul, says the first doses of the Sinovac Covid-19 vaccine will arrive in Thailand on February 24. The first batch of 200,000 doses will leave China on February 20. Anutin’s statement comes after weeks of uncertainty, with the government coming in for criticism over the slow pace of the vaccine rollout. Thailand had also been expected to take delivery of the AstraZeneca/Oxford University vaccine this month, but that has now been pushed back following a supply row between the manufacturer and the EU.

Anutin says once the Chinese vaccine is in the Kingdom, it will be subject to random quality checks carried out by the Department of Medical Sciences. The local FDA is expected to approve the Sinovac jab for emergency use, with healthcare workers and other vulnerable groups first in line. The vaccine has been shown to be over 50% effective at preventing initial infections and 80% effective at preventing serious illness.

Tesco Lotus is getting a brand makeover from its new local owner Charoen Pokapand Group, who also own 7-11. The name Tesco is being dropped altogether and the word LOTUS is getting an an extra S on the end so it spells Lotus’s. The additional S one the end, complete with a possessive apostrophe, is meant to stand for SUPER. The branding update marks the end of a 23 year presence of the British hypermarket chain in Thailand. They have some 2,000 outlets around Thailand. The re-branding also includes new colours of yellow and turquoise.