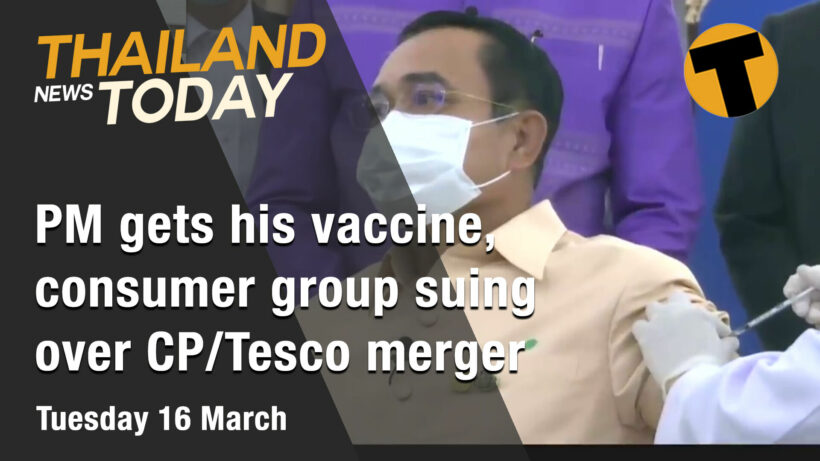 After a few false starts, the Thai PM Prayut Chan-o-cha got the first AstraZeneca vaccine in Thailand this morning. The week of delays were apparently due to safety concerns about the AstraZeneca and considerations for the PM’s age. A government spokesperson called the prime minister’s inoculation “historic” as it kicks off the country’s vaccination program.

The AstraZeneca Covid-19 vaccine, developed in partnership with Oxford University, had been suspended in some European countries after some patients developed blood clots sometime after receiving the vaccine. Only a few patients out of millions in Europe who got the vaccine reported problems with possible clots and both the European Medicines Agency and the World Health Organisation have stated that the AstraZeneca vaccine is safe.

6 markets in the Bang Khae district of Bangkok, scene of a new cluster of Covid infections, have been closed for 3 days.

The Bangkok Metropolitan Administration has ordered them all to close for deep cleaning and disinfection, adding that the closure order may be extended if there is a rise in the number of infections linked to the markets. Nearly 5,000 people have been tested between March 11 and March 14.

Thailand’s Trade Competition Commission has been served with a lawsuit courtesy of the Foundation for Consumers and 37 other consumer groups, as a result of a merger between the conglomerate Charoen Pokphand Group and Lotus (formerly Tesco Lotus).

Thailand’s Transport Minister says the location of the much-discussed southern land bridge will be confirmed by June this year. He says the bridge will provide a more convenient option for shipping goods between the Middle East and the Pacific region. The government has been reviewing various locations in the province of Chumphon on the Gulf of Thailand, and in Ranong province on the Andaman Sea, based on their engineering, environmental and economic potential.

But critics say that the time to unload, transport and reload the containers will probably take just as long as the current journey, via Singapore, so has no financial advantage for shipping companies.

Protest leader and co-founder of the Ratsadon pro-democracy group, Parit … aka Penguin, has threatened to go on hunger strike if fellow activists charged with lèse majesté offences are not released. Thailand’s lèse majesté law, officially known as section 112 of the Criminal Code, prohibits criticising, insulting, or otherwise defaming the monarchy. A number of activists have been hit with the charge for their roles in anti-government protests that have been taking place – primarily in Bangkok – since July last year.

And Bangkok Bank is now offering its customers the option to withdraw money at 7/11 convenience stores after teaming up with the retail giant. The move to allow customers greater access to transactional services is to help those in rural areas get cash quickly without needing to go to the actual bank.

6,000 people to be vaccinated in Bangkok’s Bang Khae after cluster of infections