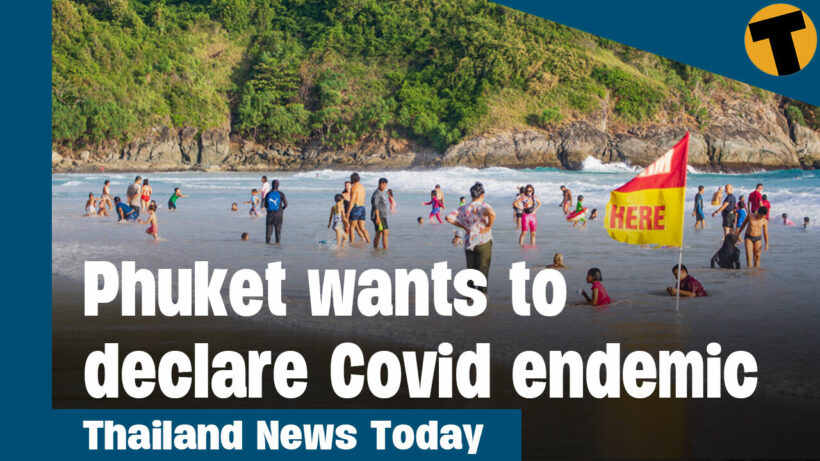 Phuket officials want to declare Covid endemic, even as the infection rate is rising on the southern island. According to a report, deputy governor Pichet Panapong says achieving endemic status would allow officials to focus on economic recovery. Local officials would also like to get rid of the daily reporting of new infections, instead only reporting Covid cases involving moderate to severe illness.

He said, quote “Phuket would be delighted to be the first province for the declaration. I hope this will help alleviate concerns about the virus and shift focus to economic restoration instead.”

Pichet is also calling for the self-isolation period for infected patients to be shortened from 10 days to 5. During the first 5 days, he says patients should be able to self-isolate at home, at a hospitel, or in a hospital. After that, they should be allowed to return to normal life, while observing strict disease prevention measures for another 5 days. The deputy governor says this would address the problem of work absenteeism due to the virus.

Phuket officials insist the island is safe and can care for both locals and tourists. It has rolled out vaccines to young children, the wearing of face masks is still mandatory, and patients with mild symptoms can be provided with basic treatments and favipiravir pills while self-isolating.

The deputy governor added that up to 3% of tourists are testing positive, with 4% of them found to be infected in day 5 tests. Phuket reported 549 new infections on Saturday. Of those, 67 were in sandbox tourists and 49 were in Test & Go arrivals.

The story of a major human trafficking case involving Rohingya people being trafficked through Thailand and to the Malaysian border was brought back to light after an MP told another side of the story.

During a general debate in parliament, he discussed how a former police officer who was charged to lead the investigation, had fled to Australia for his own safety because the case implicated too many influential figures.

The investigation started in 2015 when security forces found a camp in Songkhla which housed Rohingya migrants who are said to be victims of a human trafficking gang. Mass graves with the bodies of refugees were later found at camps in the Southern border region, many said to have died from starvation. Some tortured.

Rangsiman brought up the report from the case which said some migrants had paid 10,000 to even 70,000 baht to be transported from Myanmar to Malaysia, but they ended up at the camp where they were abused. Some say they were tortured, women were raped, some were sold into slavery, and many were left to die at the camp. According to the report, this had been going on for 10 years.

The MP told the story of how Paveen led an investigation, discovering that many residents, local politicians, police officers, soldiers, and other influential persons were behind the camp and trafficking operations. One of the most high-profile suspects was former lieutenant general มนัส คงแป้น.

ปวีณ was ordered to transfer to the “Deep South” provinces to investigate further, but he asked the national police chief to reconsider his transfer as his life would be in danger in the south. The plea was rejected. With so many powerful and influential people involved in the trafficking operation, the MP says ปวีณ decided to resign from his position and later moved to Australia for his own safety.

According to Thai PBS World, Paween spoke to a member of the Progressive Movement saying he was happy his story was told.

He said “Today is one of my happiest days. It is the story of my hardship, which has brought me nothing but stress since I escaped from Thailand six years ago.”

Many Thais have been discussing the case since the MP’s statement, sharing the hashtag on social media #ค้ามนุษย์ which translates to “human trafficking.”

One of Thailand’s most respected experts in virology says daily new infections in the country could reach 100,000.

Dr. Yong from the Centre of Excellence in Clinical Virology at Chulalongkorn University says the rapid spread of the Omicron sub-variant, BA.2, has taken daily infections to 15,000 in Singapore, where the population is a tenth that of Thailand. If the spread follows a similar pattern here, Thailand could soon see 100,000 cases a day.

Dr.Yong says infections in Thailand will have to reach their peak before they begin to level off and drop, as has been seen in several European countries and the US. Given that daily new cases will continue to rise, for now, the virologist says everyone must do their utmost to reduce their risk of contracting the virus.

People who do test positive should have this confirmed by PCR test and then self-isolate at home or in community isolation facilities. He goes on to say that if 100,000 people a day were to take a PCR test, with each test costing an average of 1,000 baht, the total cost for just 1 day would be around 100 million baht. In that situation, it would be impossible for everyone who tests positive to be admitted to hospital.

Yong says Thailand’s current rate of infection is 10 times what was seen in the first 4 waves of the virus, making it possible for the first time to reach a six-digit daily infection number.

Thailand wants women to have more babies and authorities plan to hire influencer mothers and celebrity parents to help inspire young couples to have children.

The Public Health Ministry is leading the effort following reports that the birth rate in Thailand dropped to its lowest level in the past 50 years. Yeah, that’s what happens when you lock the whole country down.

In the past, the average Thai woman would have 5 children. With concerns of overpopulation, the government launched a campaign in 1972 which translated to “More babies, more poverty.” But now the falling birth rate is posing a threat to Thailand’s future economy. Who’d have thought centralised planning would have knock-on effects.

The Office of the National Economic and Social Development Council now says the low birth rate could lead to problems in the future, such as labour shortages and less tax revenue.

The idea was met with a backlash as people are saying that the government should focus on fixing the economic crisis because that was the reason why people avoid having children.

The Deputy Minister of Public Health, Sathit, shared that the low birth rate is a national topic. He said that it’s good that the public is sharing their opinions on the campaign, adding that the idea to hire influencers is just one of the plans and there are more steps the government plans to take to fix the problem.

The minister also discussed the cost of living and how the government plans to make it more affordable for families to raise children.