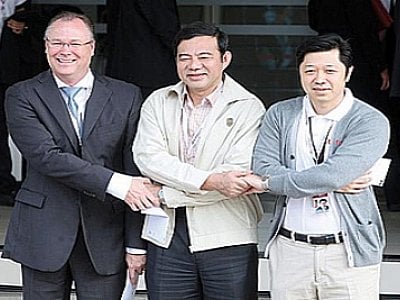 
Lacklustre 3G bids slammed by TDRI
Phuket Gazette / The Nation
PHUKET: As expected, Thailand’s first 2.1-gigahertz (GHz) spectrum auction yesterday turned out to be a less-than fiercely competitive affair, with the three highest bidders paying a combined 41,625 billion baht – less than 3 per cent above the reserve price – for the nine prized spectrum slots after seven rounds of bidding.

Thailand Development Research Institute (TDRI) president Somkiat Tangkitvanich yesterday slammed the auction outcome as costly for the state coffers and for taxpayers. He said the outcome was what he had expected: he cited a combined price for the nine slots totaling 41.650bn, only slightly higher than the combined reserve price of 40.5bn, or 4.5bn per 5-megahertz (MHz) bandwidth slot.

Following the finalizing of yesterday’s bidding, the National Broadcasting and Telecommunications Commission (NBTC) is expected to grant the 15-year licenses to the three bidders in January.

NBTC telecom committee chairman Settapong Malisuwan said the commission is ready to deal with possible legal suits against the outcome and insisted that the NBTC proceeded with the auction with the country’s interests at heart.

The full market value of each slot is Bt6.4 billion, totaling 57.960bn for the nine slots, according to the evaluation by the NBTC’s reserve price panel, comprising a group of economics lecturers from Chulalongkorn University.

“Even though the auction means the Thai public will have a 3G-2.1GHz service available next year, this has cost the state coffers 16.335bn when compared to the full spectrum value. It’s like giving them [the bidders] a windfall,” Somkiat said.

Somkiat added that the biggest flaws in the auction were in its terms and conditions, which he said allowed three bidders to grab the maximum three slots each and which set a low reserve price, failing to promote strong competition. He wanted to know how the NBTC would take responsibility for the state’s loss, and urged related state agencies to investigate the auction.

He added that the main objective of the auction was to effectively allocate all the spectrum slots: the price was not the priority.

“We’re satisfied with the final outcome [which] is 1.125bn higher than the total reserve price of nine slots,” Suthiphon added.

Settapong said if there was no 2.1GHz auction, there would be no auction of the 1,800MHz spectrum.

He said that the concessions of some telecom operators would end soon, so it is necessary to find a way to grant them access to the spectrum to help them continue to provide service to customers.

A telecom analyst said it would take four years at least for them to gain regular cost savings from the licenses, as they will not be able to migrate all customers from the concessions to the licenses overnight.

AIS has over 34 million customers, while DTAC has over 23 million and TrueMove 17 million.

Sam Dinkin, senior auction consultant of Power Auctions, said there was no collusion detected among the bidders. “There is no evidence of collusion,” he said.

NBTC hired Power Auctions to incorporate the auction rules into the software used and to support its management of the 3G auction.

AWN was the top bidder, quoting a total of 14.625bn for three slots. Under the terms of the auction, the highest bidder is given first choice of their desired spectrum range. AWN selected ranges adjacent to that being used currently to provide 3G service by its concession owner, TOT.

Real Future and DTN quoted equal final prices for each of their slots. They had to draw lots to be the second to select the spectrum range. Real Future selected ranges in the middle of 2.1GHz band, while DTN selected those in the first range.

The auction took around six hours. In the closing round, there were six slots with prices of Bt4.5 billion each. Two slots attracted the highest individual per-slot price of 4.950bn, while another was priced at 4.725bn.

The first round of the initial bidding phase started at 10am when all had to quote the same reserve price of 4.5bn per slot. The price could be raised at fixed increments of 225 million baht per round. Each bidder was given 30 minutes to consider before placing a bid in each round.

In the last round, no bidder placed a quote or waived a price offering. As a result, the auction ended at 3:45pm.