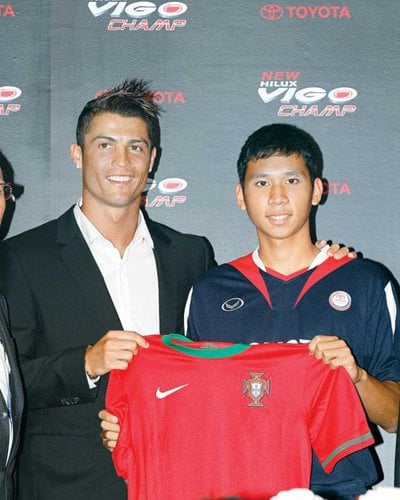 Over 300 journalists descended on the Plaza Athinee Hotel with hopes of talking to the Real Madrid striker, who has been in the Kingdom for more than a week holidaying with Russian model and girlfriend Irina Shayk.

The Portuguese, with unusually tanned skin after enjoying the sun and sands of Phang Nga, Krabi and Phuket, impressed everyone with his charm and friendly smiles. He made a brief appearance to sign the contract, believed to be worth between 3 and 5 million baht.

Although there was no Q&A session with the media, the 27-year-old footballer spared a moment to give a message to his fans here.

“I thank all of them for giving fantastic support to me since I arrived. In the hotel, I could see from the television that people here really love football and for me that’s amazing because in my life that’s what I do. I thank and urge them to keep supporting,” said the Portuguese team captain, who led his team to the Euro 2012 semi-finals before losing to eventual champions Spain on penalty kicks.

He also gave a Portugal national jersey to a Thai junior player and shared some thoughts on how local youngsters could fulfill their soccer ambitions.

“To be in top form all the time, I believe in myself. I set goals and believe in what I can do, every year and every season. I never give up. I don’t just think about my career or my job but I also help other people to believe in themselves. I like to continue working to achieve my goals,’ said Ronaldo who has been the brand ambassador of the pickup for the last two years.

Ronaldo has been spending his second off-season break in Thailand, following a post-Euro 2012 holiday in St Tropez, France.

He arrived in Phuket on July 7 on a private jet before traveling by boat to Phang Nga. Staying in one of the province’s luxurious island resorts at a reported 40,000 baht per night.

The couple had to stay indoors for a few days due to rainy weather but when the southern skies cleared late last week, the Portuguese and his Russian sweetheart went out on a sea trip, stopping at famed bays and also at the famous Phi Phi Island.

They posted pictures of their activities, including canoeing and fishing, on their social media sites. The latest picture in Ronaldo’s Twitter account depicts the couple talking to villagers in a rubber plantation.

Ronaldo is due to appear on today’s “Morning News” on Channel 3 and is scheduled to shoot a promotional video with Toyota in the afternoon before leaving Thailand in the evening.