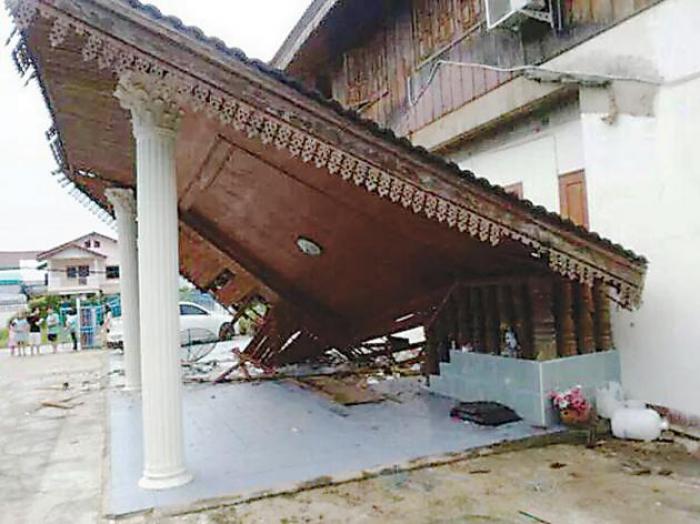 PHUKET: People in Chiang Rai’s Phan district ran out of their homes and buildings in panic as ground in the far North shook during a 6.1-magnitude earthquake yesterday.

The quake was so strong it could be felt in Bangkok high rises, such as Baiyoke Tower and Central World Mall. But no fatalities had been reported by press time.

It was believed to be the biggest quake recorded with an epicentre in Thailand.

The National Disaster Warning Centre urged people in the affected area to stay in safe places, as more aftershocks were expected. People have also been advised to follow the centre’s updates closely.

At press time, at least five aftershocks – each between 3 and 4 in magnitude – were recorded, Burin Wechbunthung, chief of the Meteorological Department’s Seismological Bureau, said.

A road in Phan district cracked when the quake took place at about 6pm yesterday evening, and a hotel in Chiang Rung district suffered damage to its exterior.

Shoppers were seen running out of the Central Plaza Mall in Muang district as things began falling off the shelves, while ceiling tiles at Chiang Rai Airport began dropping during the quake.

Chalermchai Kositpipat, a Thai artist famous for religious paintings who built the famous Wat Rong Khun in Muang district, told Nation TV that the temple’s high-rise structure and pagoda – as well as the hall featuring his paintings – had been damaged by the quake. He said he had no idea how the damage would be repaired.

“The earth shook so violently that it felt like the end of world,” he said, adding that the damage could not be assessed just yet.

He called on people living within a 50-kilometre radius from the epicentre to stay outside buildings that have cracks, because there may be more aftershocks in the next three or four days.

Penneung said the quake, which damaged several properties, was the largest in Thailand since 1935, when a 6.5-magnitude quake hit Nan province and an area near the Lao border.

He also urged officials to survey the damage within a 10-20km radius from the epicentre and provide aid to any affected residents.

The impact was also felt in other provinces in the North and ancient sites with structural issues reported cracks and damage.

Chiang Mai residents said they felt the earth shaking violently for several minutes, and many shoppers at malls and those living in buildings higher two storeys ran out in panic.

Office worker Patlada Pattanodom said the quake’s impact prompted her to rush out of her home in Hang Dong district.

“I could hear the ceiling creaking loudly, and everything fell out of the shelves. So my husband and I ran out of the house. We thought we were going to die,” she said.

PHUKET: Thousands upon thousands of people, dressed in yellow, gathered at different locations to mark Coronation Day yesterday, with the biggest ceremony held in the resort town of Hua Hin, where His Majesty the King currently resides. Yesterday marked His Majesty’s 64th year on the throne.

In Hua Hin, thousands of locals and visitors began assembling on Phetchkasem Road from Sunday night so they could catch a glimpse of His Majesty when his motorcade drove past yesterday.

Many of the King’s loyal subjects shed tears of joy to see their beloved monarch in good health, and the “Long live the King” chant was heard loud and far.

Homes and buildings throughout the district were decorated with yellow banners carrying goodwill messages and the Royal emblem.

At around 10.30am, His Majesty arrived at Rajapracha Samakhom Pavilion at Klai Kangwon Palace and presided over a Buddhist ceremony, before leaving at around 11am. The King, who is 86, did not make a speech.

Instead, His Royal Highness Crown Prince Maha Vajiralongkorn conducted rituals to bless the royal umbrella, crown jewels and other royal accessories and emblems on behalf of the King. After this, the three branches of the Armed Forces conducted a 21-gun salute.

In Bangkok, Phra Thep Bidorn Palace in the Emerald Buddha Temple was opened from 8am to 5pm to allow the public to pay their respects to the previous kings of the Chakri Dynasty, whose statues are inside the building. Thousands of people attended government events held at city halls around the country to mark Coronation Day.

Sinchai Saengsin, a fruit farmer from Kanchanaburi, and his wife went to Prachuap Khiri Khan province on Saturday to visit a project initiated by His Majesty before reserving a place in front of Klai Kangwon Palace on Sunday morning.

Angkhawipha Adisakwatthana, 50, who grows and sells organic vegetables based on the King’s self-sufficiency principle, arrived in Hua Hin on Saturday to catch a glimpse of His Majesty for the first time.

In Bangkok, a march by the anti-government People’s Democratic Reform Committee was organised, with supporters wearing yellow as requested by the protest leader. They converged in large numbers outside the temple of the Emerald Buddha to hold a ceremony to honour the King. Other ceremonies were held elsewhere in the capital.

PHUKET: Many political players and stakeholders will make moves today in the rush to reach a solution to end the unrest that has loomed large over the country for months. The Election Commission will prepare the draft for a royal decree to call another election. Opposition party leader Abhisit Vejjajiva will submit to the commission his plan to delay the poll and install a non-elected interim government.

Prime Minister Yingluck Shinawatra, the protesters and all other political parties will also receive the plan in detail and have been asked to act on their parts in the plan.

EC secretary-general Puchong Nutrawong said that if the five-member commission agreed on the election decree, it would be submitted to the Cabinet without delay. The EC and the government last week agreed to schedule July 20 as the election date.

The EC members would also consider Abhisit’s idea to break the political impasse, he said.

Abhisit asked the EC to change some laws and regulations to have harsher penalties for electoral fraud and prohibit populist poll campaigns.

Abhisit’s plan requires political parties wishing to run in the next election to promise to support national reform and the next government would stay in power for only one year to carry out reform.

The Democrat Party leader on Saturday announced his plan which, if accepted, would mean the election set for July 20 would be postponed. He also asked Yingluck to step down, and asked