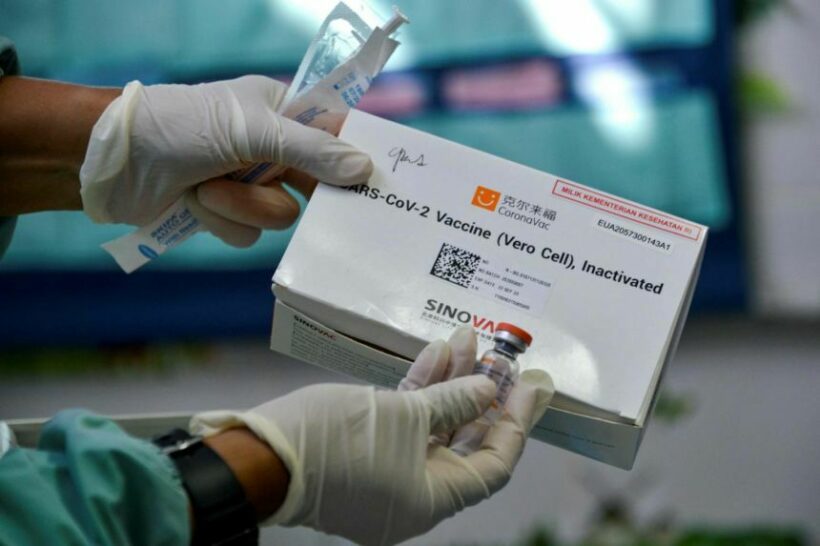 Another 3.5 million Sinovac Biotech vaccines have been confirmed to be arriving by the end of May, health officials said Friday. With a slow vaccine rollout putting Thailand’s ambitious July 1 reopening plan in jeopardy, the confirmation of another batch of jabs is welcomed news.

The head of the Government Pharmaceutical Organisation announced the first million vaccines will arrive in just a few days, with a May 6 expected delivery date. By the end of May, 2 million more are expected to follow. The Chinese government has committed to donating an extra 500,000 jabs to round out the 3.5 million figure.

While the vaccine rollout in Thailand has been disappointingly slow, 2.5 million Sinovac vaccines have been distributed and is being administered mainly to health workers and those who are considered high risk for exposure or infection.

Thailand is acquiring vaccines from different brands and sources, but red tape and productions issues have mired progress. Sinovac and AstraZeneca are approved for use, with Zuellig Pharma, the producer of Moderna, requesting emergency authorisation to clear their vaccines for imports. Johnson & Johnson, Pfizer, China’s Sinopharm, Bharat Biotech of India, and Russian vaccine Sputnik have all been reported to be in some stage of the complex registration, evaluation and approval process.

High hopes are pinned on AstraZeneca though, and their production partnership deal with Thailand’s Siam Bioscience, expected to start pumping out 61 million jabs of the AstraZeneca vaccine in the coming months. Production and delivery was scheduled for June, but rumours are suggesting delays until July.

The third wave of Covid-19 has hit Thailand far harder than the relatively mild first 2 waves, especially with the outbreak of the B.1.1.7 variant which is much more transmissible. Last month saw a record 36,000 infections and over 100 deaths, with increasing numbers of critical condition cases and people on ventilators.

Cooking food at home more? Most Thais are during Covid-19