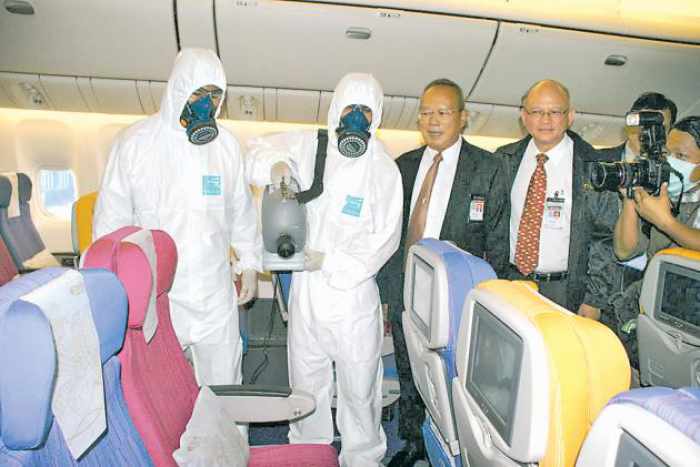 THAI steps up fight against Ebola
The Nation / Phuket Gazette

PHUKET: Private and public organisations are putting more precautionary actions in place here against the Ebola outbreak in Africa to ensure safety.

Thai Airways International (THAI) yesterday demonstrated aircraft cleaning and vaccination at Suvarnabhumi Airport to give confidence to passengers who will travel with the airline.

The airline said no Ebola-infected passenger has travelled with the airline, but they needed to carry out precautionary measures to ensure passenger and crew safety.

Those measures resulted in prevention of the spread of the outbreak, earning THAI a commendation from the World Health Organisation (WHO).

Additionally, THAI does not fly to any of the three African countries – Guinea, Sierra Leone and Liberia – where there is an outbreak of the Ebola virus. THAI operates only to Johannesburg in South Africa, which has not had any reports on the outbreak.

AirAsia, the largest low-cost airline in the region, is also applying Ebola-prevention measures on the ground and on board. At the airport, the airline is operating with a 24-hour medical centre. Passengers on board will be monitored by crews.

The airline spokesperson said it also provided masks and gloves at the airport for immediate use.

Another preventative measure is asking passengers from China and India to provide travel information to the airline.

Surapong Techaruvichit, president of Thai Hotels Association (THA) said 800 members nationwide had received information about the Ebola situation. Key information is from the Health Ministry which is the official body dealing with the issue.

A representative of Tourism Authority of Thailand (TAT) said the authority is concerned about the problem. However, there’s no official warning or special advice from TAT, as Thailand is not yet affected by the crisis.