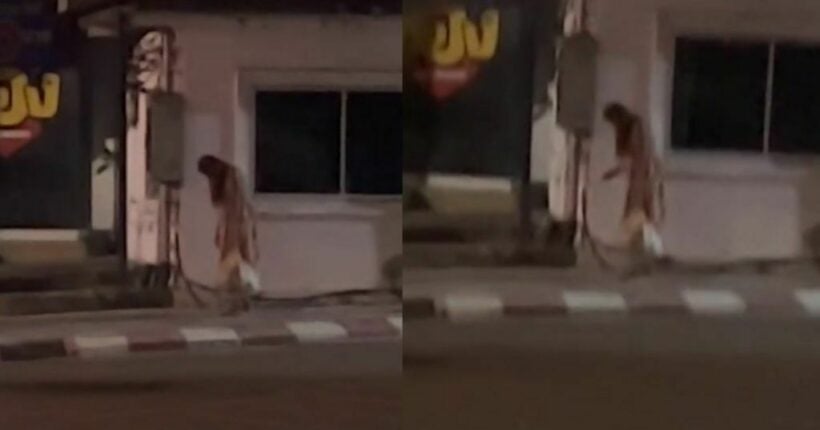 The screenshots show the woman was standing on the sidewalk at night. | Photo vis Beam Manassaya

A Thai TikTok user has shared a video of a woman standing still on the sidewalk in Pattaya in the middle of the night. Thai netizens commented on the post, saying she might be homeless, and she only took one or two steps then stood without moving for hours. Many people urged authorities to take care of her to prevent any harm or accident that could happen to her.

The female TikToker posted a video featuring a woman with long hair wearing a long white dress and standing on the street with her face down. The caption read… “Why is she standing like that!? I saw she was there for so long before I started recording. It’s 11.35 pm now. That gave me goosebumps. I tried honking at her, but nothing happened.”

Pattaya netizens commented on the post, saying the locals knew her as “Pa Sai Yut” or “Always Stuck Aunty” because she always stops after walking only one or two steps. She’s been spotted everywhere in the city of Pattaya: at intersections, on sidewalks and even in shopping malls. No one knows who she was or where she came from, and everyone is still curious about her symptoms and any disease that may cause her to act this way.

Since the video went viral on Thai social media, many people have asked the relevant authorities to check and take care of her properly, in order to prevent any harm from happening to her. The Thai media also speculated that the slow moving woman might have catatonia, a behavioral syndrome that causes abnormal movements or behaviors.

ace035
Ghost farang lady
farang
i think the lady needs help,maybe some meds or treatment.i do hope some one will check it out to see if she does have a medical condition.

Jordee
You have, most of you, the sensitivity of a Turkish prison officer in the 1950s. Alluded can reply to know more about this reply.

PapayaBokBok
On 4/5/2022 at 10:00 PM, ace035 said: Ghost farang lady or a hiso thai with freaky white skin.....(shudders)
Lawyers_Guns_and_Money
On 4/5/2022 at 12:51 AM, Thaiger said: A Thai TikTok user has shared a video of a woman standing still on the sidewalk in Pattaya in the middle of the night. Thai netizens commented on the post, saying she might…