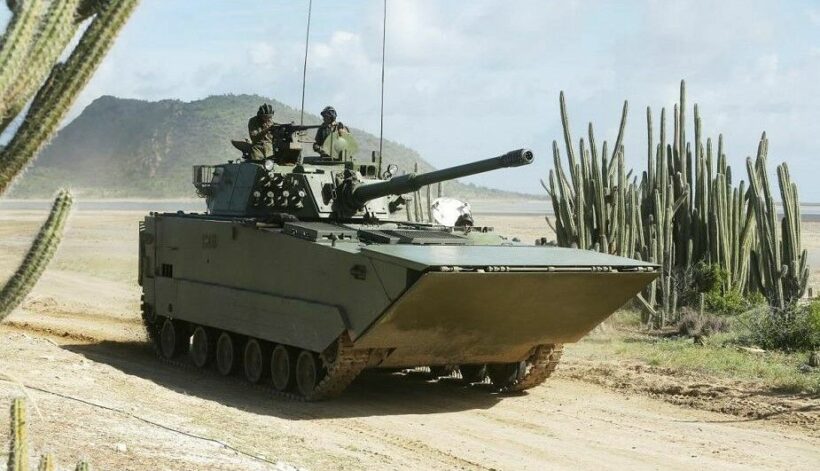 A spokesman yesterday defended the Royal Thai Navy’s decision to buy 3 Chinese tanks, while the country struggles to purchase an adequate supply of Covid-19 vaccines. According to a Bangkok Post report, Navy spokesman Chettha Chaipiam says the purchase was agreed prior to the arrival of the pandemic. He points out that, the 398-million-baht agreement was signed during the 2020 financial year, committing Thailand to the purchase.

Chettha was responding to remarks made during a debate on the national budget. Opposition politicians asked why Chinese tanks had arrived in Thailand prior to essential Covid-19 vaccines, which they argue are a higher priority. The observations have led to widespread criticism of the government on social media.

The VN16 is a light tank that can be deployed on land or water and is made by the China North Industries Group. It’s understood the Navy placed the order last June and took delivery of the 3 tanks last week. They are expected to be assigned to the Marine Division in the Sattahip district of Chon Buri, in eastern Thailand.

Meanwhile, in a separate discussion, PM Prayut Chan-o-cha said he’s held talks with the Public Health Minister, Anutin Charnvirakul, over his party’s opposition to the proposed national budget. The Bhumjaithai Party, of which Anutin is leader, is in coalition with the PM’s Palang Pracharath party. The PM says funds from outside of the 2022 budget have been earmarked for funding the Health Ministry’s response to the pandemic. He was responding to a comment from a Bhumjaithai MP, who has criticised government cuts to the Health Ministry’s budget and called on Anutin to leave the coalition.

However, government spokesman Anucha Burapachaisri says Anutin addressed Cabinet yesterday to explain that it had all been a misunderstanding, and that 293 billion baht, plus a further 311 million, have already been set aside for fighting the pandemic.

King Cotton
26 minutes ago, Thaiger said: Royal Thai Navy’s decision to buy 3 Chinese tanks Tanks for the navy? I guess the submarines will be for the air-force . . . or the army, maybe, since this is Thailand's military demonstrating how…

Andrew Reeve
The Thai military have been purchasing tanks from China for several years and the last deal to hit the headlines was an order for $58M Chinese tanks back in 2017.