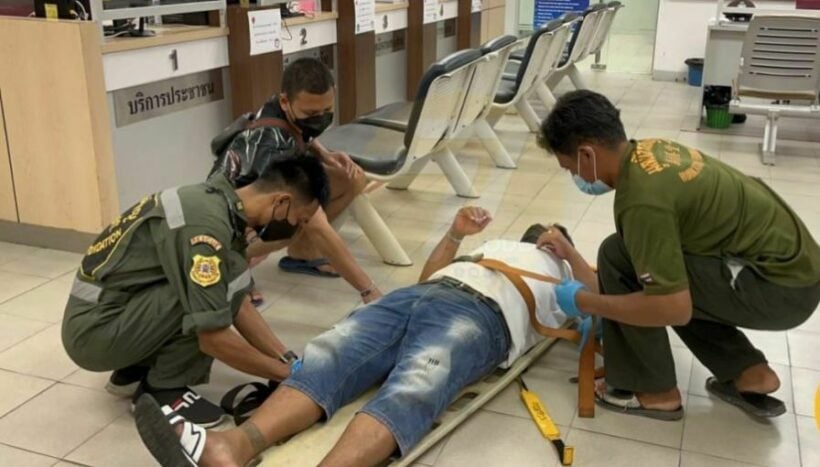 A Thai man demands an airline to take responsibility for injuries that he said were caused by turbulence during a flight from Nakhon Si Thammarat to Bangkok yesterday evening. He said his lower back and coccyx were in “agony,” but when he expressed the wish to go to hospital, he was allegedly told to pay for the expenses himself. The airline has denied responsibility for his injuries.

As the flight landed at Suvarnabhumi airport at around 9pm yesterday evening, airline staff asked 45 year old Waritphat Bunma whether he wanted them to call him an ambulance, so he said yes. Then, the airline staff said he would have to pay for the expenses himself. So, he went to hospital in a van instead. After his trip to the hospital, he went to the airport’s police station to file a complaint against the airline.

Waritphat said his injuries were caused by the impact of repeated turbulence throughout the journey and a bumpy landing.

Police Lt. Cl. Paisan Weerakitpanich, an officer at Suvarnabhumi Airport Police Station, confirmed that the man went to Sikarin Hospital in Bang Na where he could use universal Thai health insurance. Police were still waiting for the hospital to send the results determining the severity and cause of his injuries, he added.

In Thai media reports, the airline has not been named.

Grumpyoldman
Bet he wasn't wearing his seat belt, as advised. What a knob end.
BJoe
The biggest culprit in this scenario is “Mother Nature”.
HiuMak
The airline, not named here, should take responsibility.

Pinetree
3 hours ago, HiuMak said: The airline, not named here, should take responsibility. They have no responsibility for this kind of incident.   Its part of flying, that's why they provide seat belts and tell passengers to wear them at all…
HiuMak
Aircraft toilets should have seatbelts then 🤣