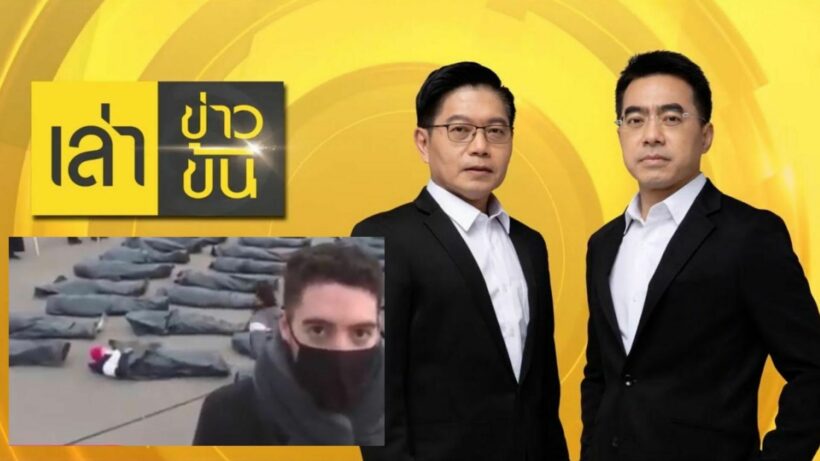 Earlier this week, two anchors of the Thai army-owned TV station Channel 5 falsely stated that Ukrainians “faked casualties” in a broadcast of their Lao Khao Khon (เล่าข่าวข้น). The footage was actually from a climate change protest in Austria last month where activists lay on the ground with body bags as a demonstration.

From the original clip that went viral on social media, a reporter is seen presenting in front of what seem to be rows of body bags. Until a woman comes over to zip it back, and a person can be seen moving around within one of the bags. The climate change protest in Austria’s capital Vienna clearly has nothing to do with Ukraine.

In a broadcast on Royal Thai Army’s Channel 5, reporters showed the clip, presenting it as a scene from Ukraine following the Russian invasion where a number of civilians have been killed.

One anchor said “Watch this footage, there’re corpses lying there, we believe they are Ukrainian people. Do you see those bodies in the bags? Some bodies are still moving.” Another continued by saying “The floor’s hot, maybe.”

It was unknown whether the hosts of the Thai TV channel purposefully submitted false material or were ignorant and did not bother to verify if the video is true. One of the reports has a history of spreading false news in support of his political views, according to the news outlet Coconuts Bangkok.

He used the video to take a defensive stance against Moscow’s attack on Ukraine.

“This is fake news, people. Like they are trying to show that yeah, Russia is so brutal. Russia has bombed them for 4-5 days and people died.”

The hosts’ incorrect and inaccurate material was called out by Thai Journalist Association board member and former Khaosod English reporter, who urged action from media organisations such as the National Press Council and Thai Broadcast Journalists Association.

Dedinbed
28 minutes ago, Thaiger said: Earlier this week, two anchors of the Thai army-owned TV station Channel 5 falsely stated that Ukrainians “faked casualties” in a broadcast of their Lao Khao Khon What was that about a crackdown on this…

palooka
I was under the impression that under the emergency decree, current in Thailand, that there are strict rules against using any form of media to promote fake news.
vlad
Thai Prem stated a while ago he will pursue and charge anyone spreading false news. As this is a Army website what chance ? 2 Burmese dressed up and trying to cause trouble.

Soidog
2 minutes ago, vlad said: Thai Prem stated a while ago he will pursue and charge anyone spreading false news. As this is a Army website what chance ? 2 Burmese dressed up and trying to cause trouble. Yes he…
ShibaBud
Talking about fake news....there can be fatal unintended consequences. I have not read 1 single Mainstream Media delve into the real reason Russia invaded Ukraine. The approved narrative always points to Russia's "military ambition," like the one that suggests China…