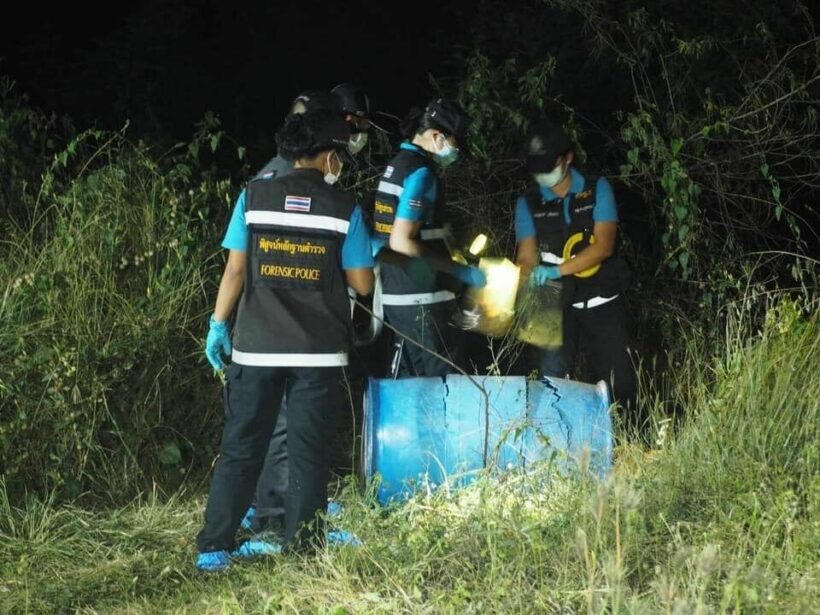 A teenager in Thailand’s Isaan region, with the help of her boyfriend, allegedly strangled her 62 year old grandmother to death and then dumped the body in a garbage bin, leaving it in a forest by a roadside in another province. Reports in Thai media say the suspects admitted to killing the grandmother because they want to steal 100,000 baht from her bank account.

The teenager allegedly told police that she started strangling her grandmother, who lost consciousness, but she wasn’t strong enough to kill her. Reports vary on what happened next. Some say she called her 23 year old boyfriend in Tak, who then allegedly brought a rope and tied it around the woman’s next to kill her. Others say the woman used rope herself and called the boyfriend to help dispose of the body.

Reports in Thai media say the young couple had never met in person, and the boyfriend had driven from Tak to Nakhon Ratchasima to help his girlfriend.

They allegedly stole a garbage bin from a neighbour, dumped the body inside, and filled the bin with dirt. Reports say they then drove the bin to the Suphan Buri.

The grandmother’s body was found in a 200-litre garbage bin by the road in Suphan Buri. Police tracked down the couple and arrested them.

The granddaughter allegedly told police that she had fought with her grandmother in the past. Reports say the grandmother had 100,000 baht in her bank account, claiming the teenager want the money.

Many in the community say the grandmother loved her granddaughter and took good care of her. More than 200 people gathered at the crime scene for the re-enactment, many cursing at the suspects. Out of fear that the suspects might be attacked by the mob, the suspects remained in a vehicle.

Guest1
28 minutes ago, Thaiger said: . Reports in Thai media say the suspects admitted to killing the grandmother because they want to steal 100,000 baht from her bank account. 100.000 Baht, exactly the number a life is valued in Thailand,…

DoUKnowWhoIAm
You'd think it has to be drug addicts or some kind of mental illness? But it was just a teenager in need of cash...

Noble_Design
Mind boggling: Quote Reports in Thai media say the young couple had never met in person, and the boyfriend had driven from Tak to Nakhon Ratchasima to help his girlfriend. The bf have never met the gf and yet is…

King Cotton
1 hour ago, Thaiger said: . . . . More than 200 people gathered at the crime scene for the re-enactment, many cursing at the suspects. Out of fear that the suspects might be attacked by the mob, the suspects…

Another leak found in underwater oil pipeline off the Rayong coast

How internet-addicted are Thais? A new report finds out.