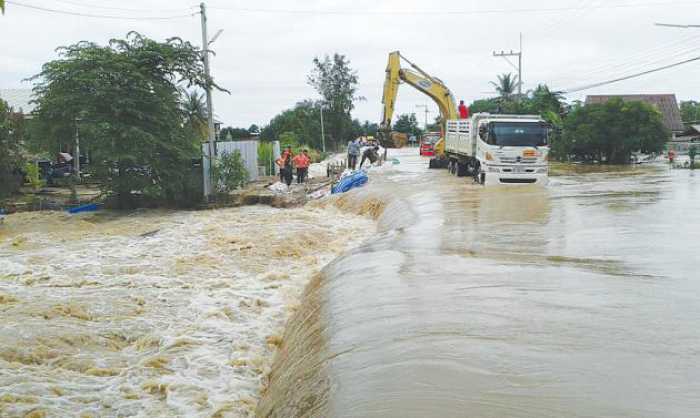 PHUKET: Floods have wreaked havoc in 25 provinces and claimed eight lives over the past two weeks. Five of the flood-hit provinces – Sukhothai, Nan, Chaiyaphum, Tak and Nakhon Sawan – are still inundated.

As of press time, the section that had collapsed was 60m long – up from 10m.

Floodwater has ravaged more than 2,800 rai (1,107 acres) of farmland in Sukhothai and affected more than 500 families.

Relevant officials have been trying to reach flood victims via flat-bottom boats.

Prime Minister General Prayuth Chan-ocha, in his capacity as Army chief, has instructed all military units to help improve the country’s water drainage by removing weeds from waterways.

With flooding in several northern provinces, the flood risk in provinces downstream is expected to rise soon.

The Yom River is a branch of the Chao Phraya, which runs through the Central region and Bangkok.

“Businesses and people living along the Chao Phraya River, in particular, must closely monitor the situation,” he said.

Darongkorn said the water volume moving into the Chao Phraya Dam in Chainat was clearly growing.

“In fact, the river has started overflowing in some districts of Ayutthaya and Suphan Buri provinces already,” he said.

To prevent a serious impact on downstream provinces, Darongkorn said his office would try to limit water discharged from the dam at around 1,100 cubic metres per second.

Initially, it was reported that the water-discharge volume would rise from 631 cubic metres per second to between 1,300-1,400 cubic metres. At such rate, the water level of the Chao Phraya would rise by one metre on Monday.

“With a water discharge of about 1,100 cubic metres per second, the water level will increase by between 30-40cm,” Darongkorn said. “But the level may rise even more under heavy rain.”

The Meteorological Department has forecast thunderstorms for most parts of the Central region and the Chao Phraya basin, this weekend.

Chatchai said flood victims could seek help from his department by calling the 1784 hotline.

NACC stands by case against Yingluck, asks if all files read