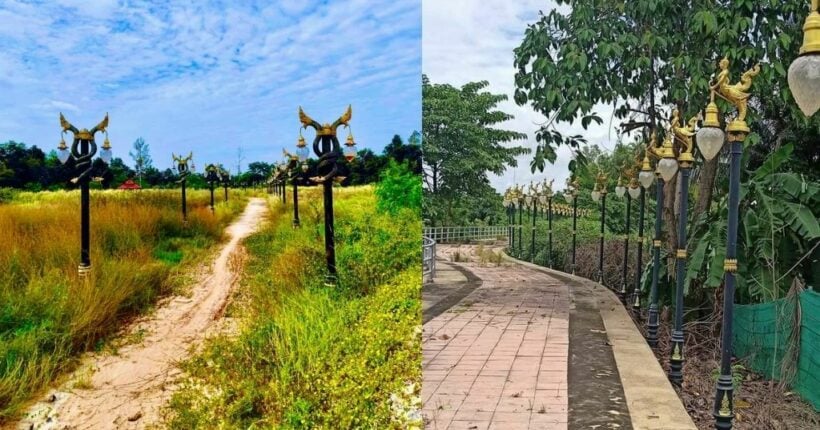 In another street light corruption case involving local governments in Thailand purchasing fancy lamp posts at exorbitant prices, photos of the decorative lamps lining a dirt road in an Isaan province is raising questions from Thais about why the government is spending its funds on what’s considered to be lavish purchases instead of improving infrastructure.

The lamp posts adorned with naga figures, half-human, half-cobra mythical beings, line a dirt road to a park in the northeastern province Mukdahan. Reports say the park was neglected with trash, used condoms, and drug paraphernalia found in the grass. According to Thai media, the lamps along the dirt road were part of a 29 million baht provincial developing project under the Department of Public Works and Town & Country Planning.

Over the past year, the spotlight on the shady street lamp purchases has been on one local government organisation in Samut Prakan, just southeast of Bangkok. Hundreds of decorative lamps topped with a mythical half-bird, half-woman, painted in gold, have been placed in the province’s Racha Thewa area. Some along streets need to be developed. Almost 1 billion baht has been spent on the decorative lamp posts in Racha Thewa since 2013, the Anti-Corruption Organisation of Thailand, or ACT, estimates.

Accusations that the government in Racha Thewa overpaid for the street lamps have shined a light on similar development projects in other provinces. Many have posted photos of the decorative lamposts throughout Thailand, with some complaining that the lamps aren’t even working.

In the eastern province Sa Kaeo, which borders Cambodia, locals say fancy street lamps along a pathway by a canal aren’t even working. The lamps were part of a 10.5 million baht project. The deputy mayor of the province said the beautiful lamps made the atmosphere better. 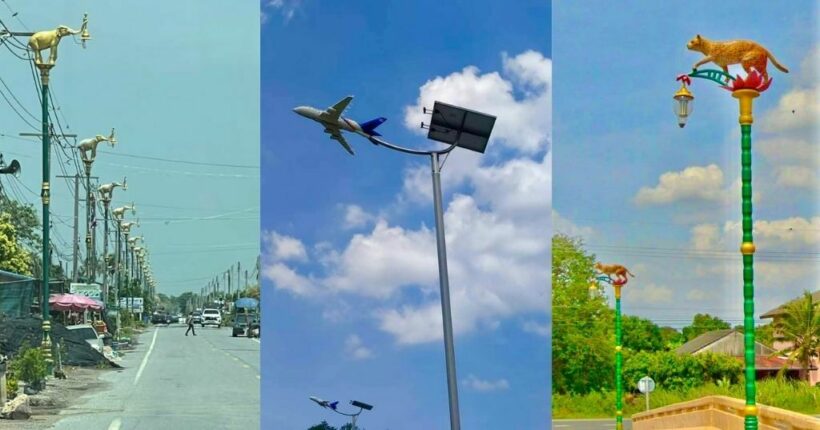 DoUKnowWhoIAm
1 hour ago, Thaiger said: The deputy mayor of the province said the beautiful lamps made the atmosphere better. The beautiful money made the wallet thicker.
DWiener
Seriously, what is wrong with these people? The ugly streetlamps are everywhere from Krabi to Samui, Phuket...
gazmo16
Why are they buying these lamps ? Take your pick A . corruption involved B . out of touch with the real needs of the local community What will happen A. Nothing B. Those in involved go to jail