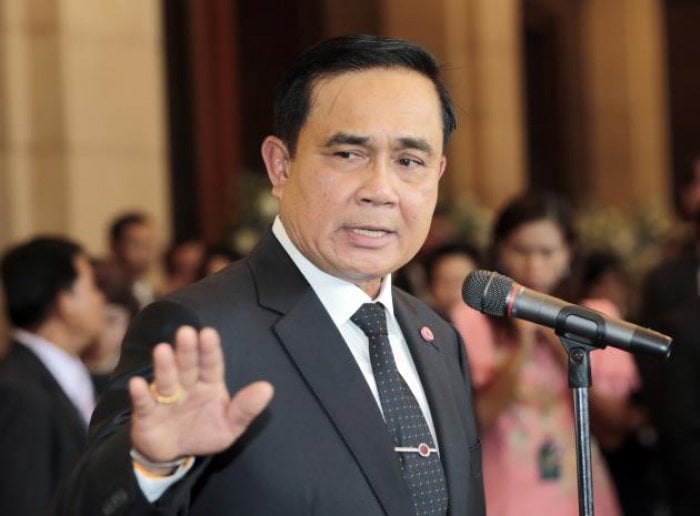 Referendum up to NRC and CDC: PM
The Nation / Phuket Gazette

PHUKET: The decision on whether to hold a referendum on the new draft constitution lies with the National Reform Council (NRC) and the Constitution Drafting Committee (CDC), Prime Minister Gen Prayut Chan-o-cha said yesterday.

Contrary to popular belief, it is not up to him to decide on the matter, but up to the NRC and the CDC, he said.

As for CDC chairman Borwornsak Uwanno’s suggestion to use the constitution for five years first before amending it, PM Prayut replied: “This constitution can be called a constitution for reform, if we see it that way. The reform could take five, 10 or 20 years. If [future elected politicians] want to amend it, they can do so as they are elected.”

Meanwhile, Deputy Prime Minister and Defence Minister Prawit Wongsuwan yesterday asked the public not to criticize the draft charter so that it does not get stuck in an impasse. He added that there was still sufficient time to adjust the draft.

“The charter’s draft has to be accepted first. Then, we can proceed according to the process laid down in the roadmap. It is up to the NRC and the CDC to figure out how they would amend [the draft charter] before submitting it to the NCPO and the cabinet. ”

He went on to say: “We do not even know whether the NRC would approve the draft charter. This is a matter for the future. However, I have not seen the suggestion regarding Articles 181 and 182, which provide the premier with power to implement laws and grant pardons to those who exhibit remorse and those who give useful testimony to a case. I do not know things in detail. I will have to study the draft charter first. As for the issue on whether to amend it or not, that is another issue.”

When asked whether the NCPO would like to prolong its time in power by delaying the deadline for the implementation of the new constitution, PM Prawit replied that the NCPO had no intention of staying longer in power.

Asked if the new CDC and NRC would still be set up if the current draft fails to get NRC approval, PM Prawit said the provisional constitution already provided the outline on what to do in those circumstances. Nevertheless, PM Prawit added that we should not think too much about this at the moment, as it is a matter for the future.

“The premier and head of the NCPO, PM Prayut Chan-o-cha, has always insisted that he would always stick to the roadmap,” said Mr Prawit.

Talking on the same topic, former prime minister Gen Chavalit Yongchaiyudh suggested that the charter drafters prepare two constitutions for people to choose. As for Borwornsak’s proposal to accept the charter and use it for five years before changing it, Gen Chavalit said it was not enough.

“It’s better to have an alternative for the people.”

In a related development, former prime minister Chuan Leekpai said the new draft charter has been written in such a way that if he were to run for a seat in the House for the first time, it would be difficult or almost impossible for him to win.

Thai man arrested with 26 migrant workers in his car