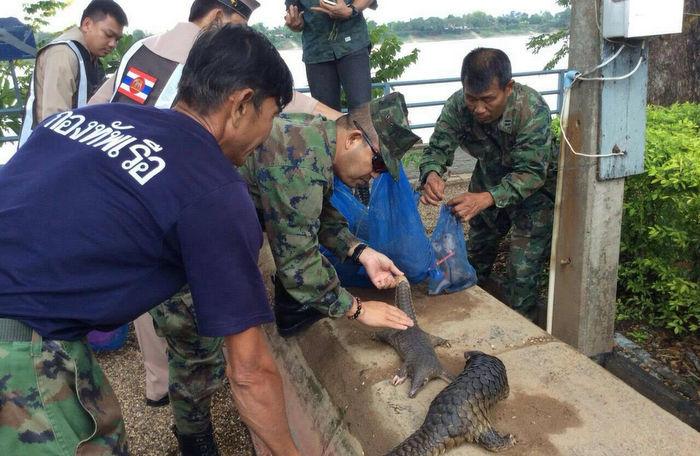 NONG KHAI: One pangolin smuggler is dead and two others arrested following a bungled attempt to smuggle live pangolins across the Mekong River from Nong Khai Province to Laos on January 23.

A 27-year-old Laos resident, named only as Mr Iaan, was loading sacks of live pangolins onto a boat when joint forces stormed the mooring point.

Two of the smugglers were arrested at the scene without a struggle, while Mr Iaan dove into the water in a bid to evade arrest.

Officers from the Mekong River Unit, the Royal Thai Army and the Natural Resources and Environmental Crime Suppression Division, acted on information supplied by Watchdog Thailand, the investigative and suppression unit of the Soi Dog Foundation.

Mr Iaan’s body was later found floating in the river. Officials later confirmed the cause of death as drowning.

At the scene, joint forces found 15 live pangolins, also known as ‘scaly anteaters’, which were later handed over to the Department of National Parks, Wildlife and Plant Conservation to be returned to the wild.

The pangolins were destined for Vietnam, where their meat is considered a delicacy and their scales are used to make Chinese medicine. Their total black market value in Vietnam would have been an estimated 350,000 baht.

One kilo of pangolin scales can fetch up to US$50,000 on the black market, making the illegal trade highly lucrative for the organized crime families that run the business.

In recent years pangolin numbers have been decimated due to illegal poaching, forcing officials to classify the species as endangered.

The raid comes on the heels of a similar wildlife interception operation on November 28 of last year in the same area, which saw a driver and passengers avoid arrest by abandoning their vehicle after Watchdog Thailand intercepted them on the way to the river’s crossing point.

Authorities found over a tonne of reptiles in the truck, including 360 cobras, 100 King cobras, 39 Asian Box turtles and 175 Elongated tortoises. The black market value of the consignment was estimated to be about 1.4 million baht.

It is thought that the consignment had already been purchased by dealers in China and Vietnam.

“Our business is about stopping dogs being shipped from Thailand to Laos. Sometimes the intelligence we get regarding dog smuggling activities actually turns out to be related to other illegal operations, such as rosewood, drugs, or, as in this case, wildlife. In these situations we are happy to share all information with the authorities,” said John Dalley, co-founder and president of the Soi Dog Foundation.

The illegal Thai trade in wildlife is estimated to be worth over US$500 million a year, including endangered pangolins, turtles, tortoises, snakes, monkeys, giant squirrel and ivory from neighboring countries.

The two arrested pangolin smugglers will be charged by authorities under the Animal Protection Act, the Customs and Excise Act and the Animal Welfare Law.

MERS patient being treated in Bangkok