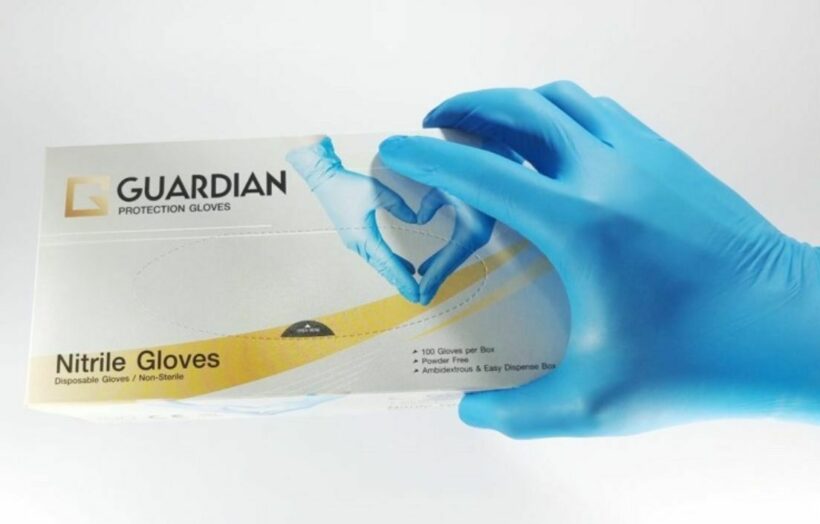 PHOTO: A 112.5 billion baht Guardian Gloves deal was not approved by the PWO board. (via Shopee)

The gloves are off as Minister of Commerce Jurin Laksanawisit received a disciplinary panel report encouraging that three top officials in the government-run Public Warehouse Organisation be fired over a 112.5 billion baht purchase deal for 500 million boxes of rubber gloves by the PWO officials.

The former acting director of the PWO and two other senior officials were found to have committed what was described as gross disciplinary violations in their decision to move ahead with the glove purchase deal without authorization from the board of the PWO. When the case was originally opened there was an investigation into embezzlement though the statements today don’t make mention of the possibility of it.

The deal has been made with Guardian Gloves, a manufacturing company in Nakhon Pathom, to produce the 500 million gloves for PWO and then purchase those same gloves back from PWO in order to resell them to 7 other traders overseas in the United States and Europe. The three top officials have already made a deposit of two billion baht from the PWO budget to the glove production company.

The deal and the deposit were pushed through without ever being reviewed or approved by the board of the PWO, in direct violation of operational protocol. The acting director said that he took the action and circumvented procedure in order to fast-track the deal which he saw as their way to get the PWO out of debt quickly.

As such, the disciplinary panel headed by the deputy permanent secretary for commerce has recommended that the three PWO officials faced justice and the deposit money must be recovered. The Commerce Ministry has requested the help of the Anti-Money Laundering Office, asking them to impound the two billion baht from Guardian Gloves.

The disciplinary panel’s recommendations will now go to the PWO board for final confirmation and action.

Bob20
35 minutes ago, Thaiger said: The gloves are off as Minister of Commerce Jurin Laksanawisit received a disciplinary panel report encouraging that three top officials in the government-run Public Warehouse Organisation be fired over a 112.5 billion baht purchase deal…
Stonker
2 hours ago, Thaiger said: a 112.5 billion baht purchase deal for 500 million boxes of rubber gloves by the PWO officials. 2 hours ago, Thaiger said: ... to produce the 500 million gloves for PWO 500 million gloves…
Jason
As a user of nitrile gloves in my occupation, they are a quality product. But their sizes weren't based on caucasian sizes. XL is Small etc etc