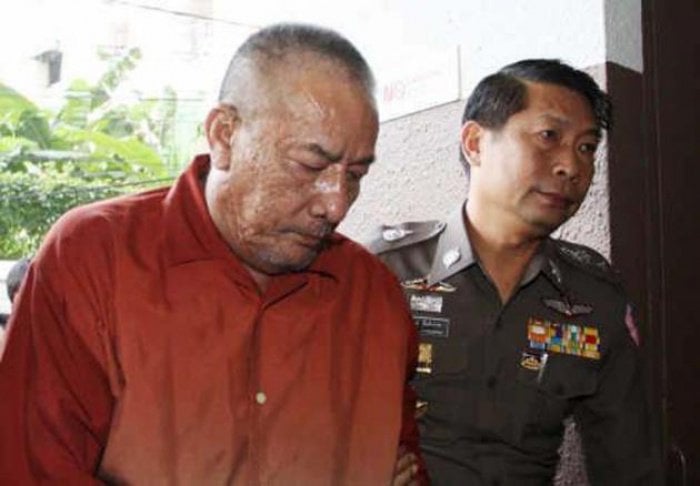 The 59-year-old Gen Pongpat had already been given 16 years and nine months behind bars for three previous crimes relating to a gambling den, Burmese rosewood plank possession and money laundering.

He and five other disgraced police officers were brought to Bangkok’s Ratchadapisek Criminal Court yesterday to hear the ruling on the two bribe-taking cases.

Gen Pongpat and Gen Kowit had their initial 10-year sentence reduced by half due to their useful confessions while Gen Boonsueb – who also faced a lese majeste charge in this case – was given a 15-year jail term that was also halved.

In the second case, Gen Pongpat, Gen Kowit, Col Wuthichart Luensukhon, 46, Sgt Surasak Chan-ngao, 50, and Sgt Chakrin Laothong, 48, were accused of conspiring to demand between 3mn baht and 5mn baht from several police officers in exchange for getting them promoted to key positions in the CIB.

They were also reportedly required to pay monthly installments of between 10,000 and 2mn baht to stay in the positions, with the bribes taking place from October 1, 2010 to November 11, 2014.

Gen Pongpat and Gen Kowit were given a 20-year sentence while the three subordinates got 12 years each.

The sentences were halved due to their useful confessions and their previous police merits.

Canned tuna from Thailand under scrutiny after four poisoned in Australia