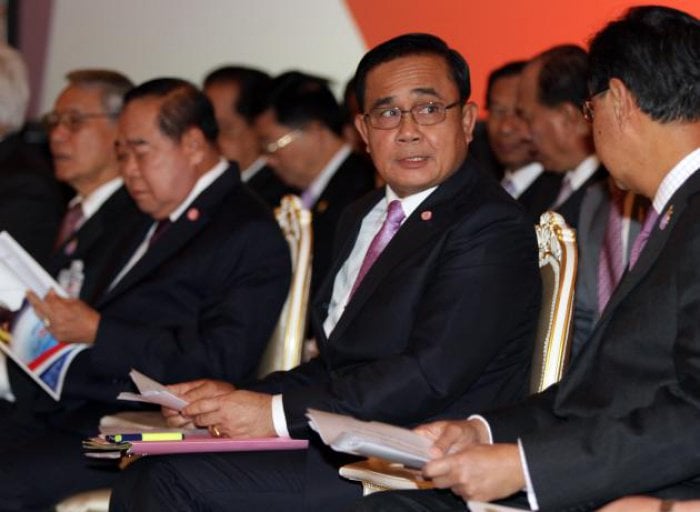 PHUKET: In his announcement yesterday on the government’s progress over the past six months, Prime Minister Gen Prayut Chan-o-cha stressed that his administration had stuck – so far – to the road map it set from the very beginning. However, he said, the ability to stay within the set time frame would depend largely on security and peace and order within society.

He delivered the speech from Government House. In it, PM Prayut was also quick to point out that the one key factor that can significantly contribute to peace is the media, whom he partly blames for creating “false political discourse”.

Instead, he said, the media should be more constructive in presenting news. “The media should ask forward-looking questions. We need to help each other create understanding and solve problems,” he said.

The government has been widely criticized at home and abroad for its heavy handling of media censorship, yet PM Prayut continues to stress the media’s role in fostering peace and shaping the country’s future.

“There’s no country in this world that can have peace with unlimited freedom, meaning freedom should go hand in hand with duty, respect of rights and mutual respect among individuals,” he said.

He went on to say that there was no government that had taken power the way he did and no leader who does what he does. “For me the power is to create accountability and fair and effective government,” he said.

While listing his government’s progress, the premier touched on a wide range of topics, including the economy, democracy, Article 44 and the justice system.

PM Prayut said he had been reluctant to enforce strict laws on political dissents, but said it was necessary for people to respect and obey the law. If the law was ignored, then there was no option but to increase the penalties, he said, adding, “if people do not respect the law, the country cannot survive”.

He also called on the public to be patient with his administration and overlook some democratic values in exchange for peace, order and long-term national reform.

“People like coming out and delivering lectures about democracy. Why do it now? Why didn’t they do it back when we still had elections?” he asked.

The premier also implied that it was too late for people to push for fully fledged democratic principles and that society should focus on reconciliation and reform instead.

PM Prayut also defended the use of Article 44, which was put in place after martial law was lifted and gives the prime minister full power over the judicial, legislative and executive branches of the administration.

“Article 44 is necessary to solve some problems, because if we can’t amend a law in time, there should be alternative measures to tackle problems under these special circumstances. People should just get on with their lives. If you have done nothing wrong, you have nothing to fear,” he said

On foreign policy, PM Prayut pointed out that Thailand had established a better understanding with the international community, especially its western allies.

“There’s nothing to be worried about with our foreign ties. At the moment, they have taken note of our explanation and understand the situation. They have no intentions to put pressure on us. I’ve talked to Russia and China, and they have invited me over for a visit.

“Europe and the US are key traders. We need to engage and negotiate with these strategic partners in order to facilitate the distribution of our products,” he said.

He referred to achievements under the five main aspects of Thailand’s foreign policy: establishing a better understanding and boosting ties with international partners; linking internal policies with foreign policy; creating integrated, coordinated cooperation among state agencies at home and abroad or “Team Thailand”; contributing to Thai people’s well-being both at home and overseas; contributing to national human-resource development and competitiveness.

“Our foreign policy is omni-directional, we don’t want to go only in one direction,” Don said, adding that Thailand was open to all countries that want to engage with it.

On the same subject, Foreign Ministry spokesman Sek Wanname-thee said the government had tried to build international confidence by sticking to its road map.

“[The government] practices and implements what it says,” Sek said, adding that the administration had never veered from the objectives set by the National Council for Peace and Order last year. This plan was designed with the objective of reforming the country in three steps: reconciliation; drafting and implementing a new constitution and organizing an election.

“So far, the government has always followed its plan as per the road map,” Sek said.