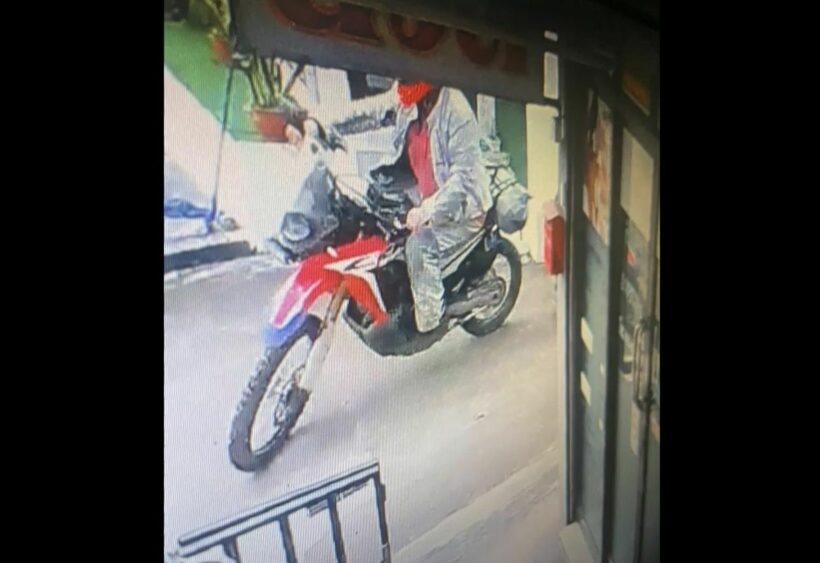 UPDATE: Thai media reports that police have arrested a 37 year old American man who allegedly raped a Thai masseuse in Khon Kaen. Police arrested the man at a Bangkok condominium off Sukhumvit Road in the Nana area. In earlier reports in Thai media, police initially thought the suspect was from Australia.

Police in the Isaan province Khon Kaen are searching for a man who allegedly raped and beat a Thai masseuse. The woman was found laying naked, drenched in blood on the floor of a local massage shop. The suspect is believed to be an Australian man around 45 to 55 years old. (Officers now say the suspect is a 37 year old American man.) Witnesses say he was wearing a pink shirt and drove off on a red motorcross motorcycle.

A woman nearby the shop saw the man walk out and drive off on the motorcycle. Someone noticed water coming out of the shop and called the owner, who lives in Bangkok. The owner checked the CCTV camera and saw the masseuse laying on the floor by the refrigerator.

Police reviewed the surveillance camera footage and sent footage of the suspect to checkpoint officers as well as immigration and police stations. An investigating team are going by local guesthouses, hotels, and motorcycle shops that are popular among expats to track down the suspect.

Thai media reports that the victim’s son told officers his mother had been working in Australia for about 7 years and returned to Thailand earlier this year. He added that he has no idea who the man is, or if she knew him before the incident.

Transam
3 minutes ago, Yinn said: Jury? pffffft   You guys do know there is no jury in Thailand right?    Why is that...?
Yinn
1 minute ago, Yinn said: 1 hour ago, Transam said: Oh dear..........You obviously know nothing about procedures used in first world country law.....🤔 Oh dear....... you obviously know nothing about where Khon Kaen is on a map. Is in Thailand.…

KaptainRob
Newer topics are openly discussing post-arrest procedures and this one has run it's course ... a little too far? Yinn is essentially correct according to Thai laws.  Transam is also correct as far as western laws go although they do…

Thai baht to continue dropping against the USD