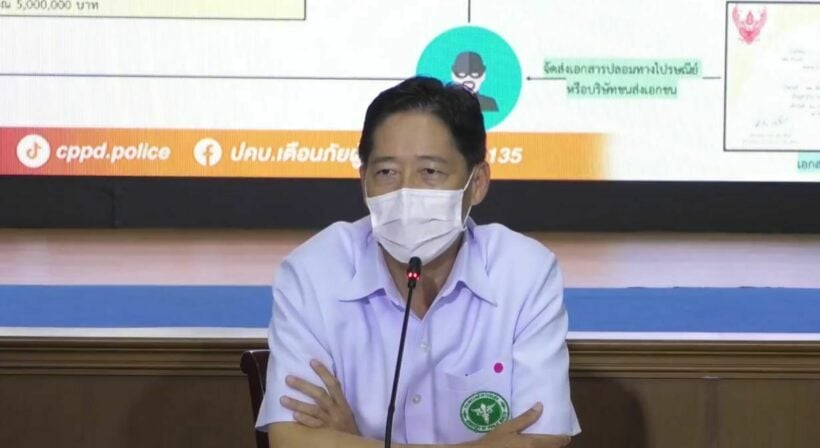 Thai police cracked down on the sales and production of fake PCR Covid-19 test results as well education certificates and other documents needed for jobs overseas. Three people, who police suspect are part of a large network, were arrested for allegedly posing as medical practitioners selling the forged documents.

The Department of Health Service Support received complaints about the sales of fake Covid-19 test results and authorities found a website offering PCR tests for 890 baht with results back within an hour for those travelling internationally. An undercover officer pretending to be a customer contacted the website on the Line messaging app. He was asked to provide his name, age, and a date for the lab test result.

The test result was issued in 15 minutes and police say the document was fake. The PCT Laboratory Service was named in the document, but the company denied providing it and later made a police complaint against all those responsible.

Police tracked down three suspects who were between the ages of 22 and 26. One suspect was arrested at an apartment in Bangkok, another in Phuket, and the other surrendered to police. One suspect denied the allegations during questioning, but the other two reportedly acknowledged committing fraud.

Officers have also seized bank books belonging to the alleged gang, which have a total of 5 million baht in the accounts. The suspects face charges for conspiring to use fake documents, tricking others into believing they were professionals in medical technology, and arranging to provide or offer services through fake documents.

DoUKnowWhoIAm
1 hour ago, Thaiger said: education certificates Whats the difference between these forgeries and the "real" ones?

Transam
5 minutes ago, DoUKnowWhoIAm said: Whats the difference between these forgeries and the "real" ones? The "water mark", now come on chap......🤣

Transam
31 minutes ago, Faraday said: That's when Somchai spilt his Lao over it...🤣 Found it............😹
Fanta
So I’m not an authorized breast cancer checker any more?