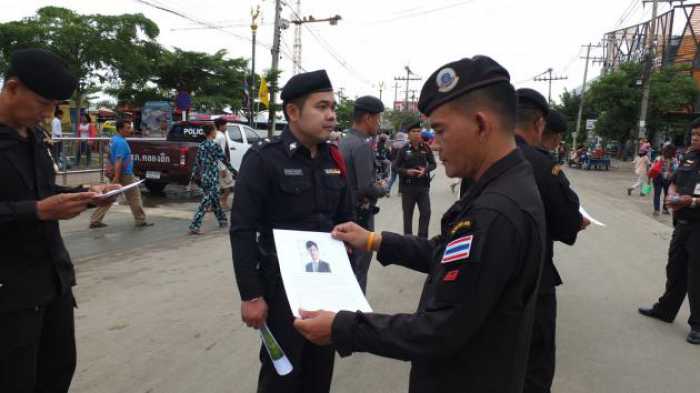 Meanwhile, a billionaire businessman accused of hiring people through Gen Pongpat to intimidate a debtor has reportedly fled to Cambodia and is likely to flee to a third country, according to the Metropolitan Police Bureau’s Lt Gen Sriwara Rangsipram-manakul, who addressed a press conference yesterday.

Nopporn Suppipat, president of Wind Energy Holding (WEH), entered Cambodia on foot on Monday at around 5am, leaving Chanthaburi’s Pong Nam Ron district, Sriwara said. Three teams of police investigators have been tasked with tracking and bringing him back to Thailand.

A large-scale mobilization of local police and immigration police in Sa Kaew and Army paramilitary rangers had been deployed at and around the Aranyaprathet border checkpoint prior to information about Nopporn already fleeing to Cambodia.

Nopporn, whose WEH is the largest in the wind-energy business in Southeast Asia, has been accused of armed intimidation, restraining freedom and criminal conspiracy involving five offenders, for allegedly hiring Gen Pongpat’s men to force an associate to reduce a 120-million-baht debt he owed to 20mn baht.

The two new suspects have been identified as Preecha Daratrai and Phaichet Maytheesariyaphong. In the police arraignment document, Preecha has been accused of abducting a man named Witthaya Panyathaweekul to negotiate a debt he owed to Preecha, through coordination launched by Phaichet.

Both men have been accused of lese majeste because they claimed to have the monarchy’s backing for their abduction while negotiating with Witthaya, the arraignment document said.

Preecha, who had promised to turn himself in to Phra Khanong police on Tuesday evening, failed to show up.

The arraignment document for the two men was submitted to the Phra Khanong court yesterday evening and was approved.

Sriwara said Preecha and Phaichet would be charged with intimidation and other crimes if they were found to have engaged in debt-collection through intimidation in other cases reported to the police in Pathum Thani.

Sriwara said a new allegation had been made against one of the suspects, former Army Major Nattapon – whose current surname is Suwadee – that he and some unidentified men had intimidated an ice vendor over his contracts with Talad Thai vegetable wholesale market in Pathum Thani. Nattapon and his men allegedly forced the ice vendor to give up his Bt24-million annual deal so that Nattapon and his men could take over the concession.

The victim, Gen Sriwara said, had suspended his business since last year out of fear after the intimidation by Nattapon, who allegedly cited backing from the monarchy.

The businessman was set to meet Phra Khanong police at 6pm yesterday to give more details, implicating Nattapon. So far 22 suspects have been wanted in connection with Gen Pongpat’s alleged intimidation and corruption, with most of them already in detention.