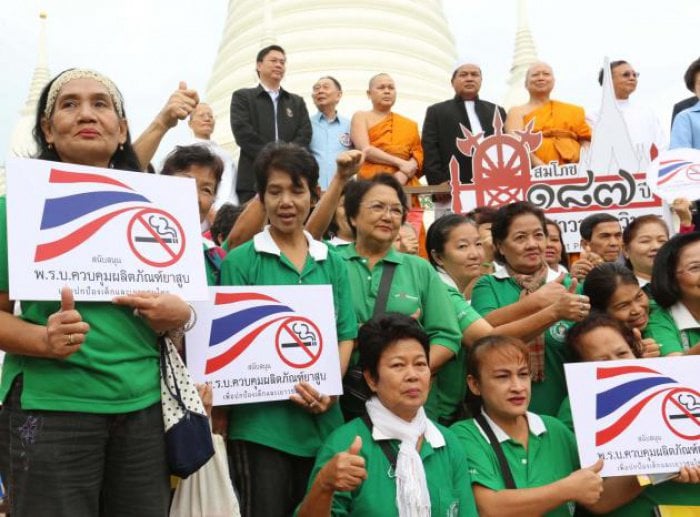 PHUKET: Tobacco farmer associations have urged Prime Minister General Prayut Chan-o-cha to put a brake on the tobacco control bill, which is now on its way to a Cabinet meeting.

The bill, if legislated, would increase the minimum age of cigarette buyers from 18 to 20 years, ban the sale of packet-less cigarettes, and prohibit the display of cigarettes at shops and stores.

The associations are fighting against the bill on grounds it threatens to hurt the country’s tobacco industry and adversely affect all involved – from tobacco farmers, retailers, importers to manufacturers.

“The drafting of the bill does not take into account our opinions,” the associations’ co-ordinator Kittitas Panaphathong said.

He said tobacco farmers had expressed opposition to the bill since its drafting began in 2012 because it would prescribe too harsh measures.

“Please withdraw it from the Cabinet meeting. Please consult all relevant parties first,” he said.

His group submitted the petition through a complaint-receiving office of the Ministry of Agriculture and Agricultural Cooperatives.

The move followed a walkout by tobacco farmers’ representatives at a meeting with ministers on Monday.

Thai Tobacco Trade Association’s executive Varaporn Namat said while her group had nothing against increasing the minimum age of cigarette buyers, it could not understand why the bill would try to ban the sale of packet-less cigarettes and display of cigarettes.

“Some smokers have tried to cut down on smoking by not buying the whole packet of cigarettes. On the display of cigarettes, I must note that the Public Health Ministry already requires cigarette packets to have large pictorial warnings about adverse health impacts from smoking,” she said.

Kris Phathong, who heads the Tobacco Farmers and Traders Association of Chiang Mai, lamented that authorities should ask for opinions from growers.

Rajata, however, defended the bill saying that if it took effect, it would likely reduce the number of new young smokers by 100,000 a year. “Research shows if we can prevent children from smoking, we will be able to save 156,000 baht [per person] in medical costs and economic losses,” he said.

Laryngetomees Association in Thailand president Karun Trakoolpadejkrai insisted the bill should go ahead because current laws have not kept pace with cigarette firms’ new strategies. His group and many medical associations support the tobacco control bill.

“I don’t want to see children suffer from smoking dangers,” Karun said. Many people lose their larynx because of smoking, he said.

Prof Somsri Pausawasdi, who chairs a group for a smoking-free Thailand, said more than 100,000 people had signed their names in support of the bill. “Our network has about 700 organizational members and allies.”

Asst Prof Lakkhana Termsirikulchai, a former lecturer at Mahidol University, said the bill would not really affect growers as more than half of Thai tobacco is exported.