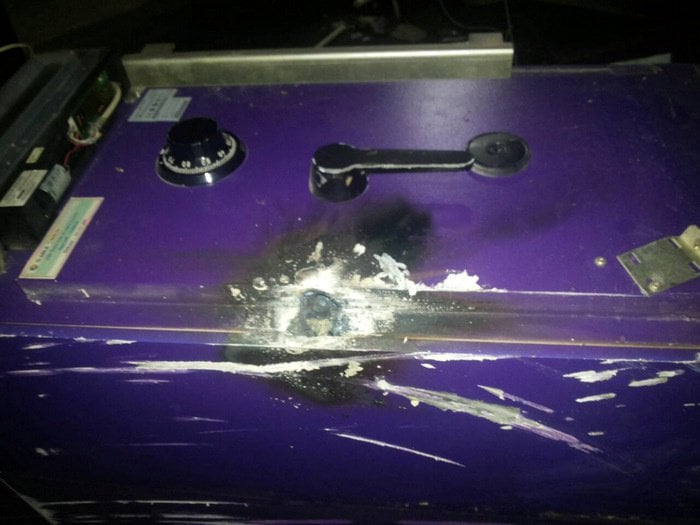 PHUKET: Police are searching for at least two suspects who ripped a Siam Commercial Bank ATM off a pharmacy wall at Baan Manik, in Thalang, before dawn this morning.

However, the suspects fled without stealing any of the cash inside, as police believe they are startled by a passer-by who spotted the thieves attempting to cut open the ATM with a blowtorch.

“We found scorch marks on the back of the machine, but the unit was unopened,” Lt Suporn Muangkhai of the Thalang Police told the Phuket Gazette.

“We believe the robbery was interrupted by someone passing by, and bank staff have confirmed that none of the cash inside the machine was taken.”

Officers arrived at the scene after receiving a report of the robbery in progress at about 4am.

“The ATM was dragged about five meters from the wall, leaving a hole to access the pharmacy,” Lt Suporn said.

“We sealed off the area, but the owner of the pharmacy has yet to confirm whether anything inside the pharmacy was stolen.”

The CCTV security camera had been turned away from the ATM, Lt Suporn noted, adding that officers had yet to review the footage from the camera in the hope of identifying the suspects.

“At this stage the only lead we have is witnesses seeing a bronze pickup truck leaving the scene, but we believe at least two people committed the crime, with at least one person acting as a lookout,” he said.

“We are checking CCTV in the area. We are keen to arrest these thieves as soon as possible.”