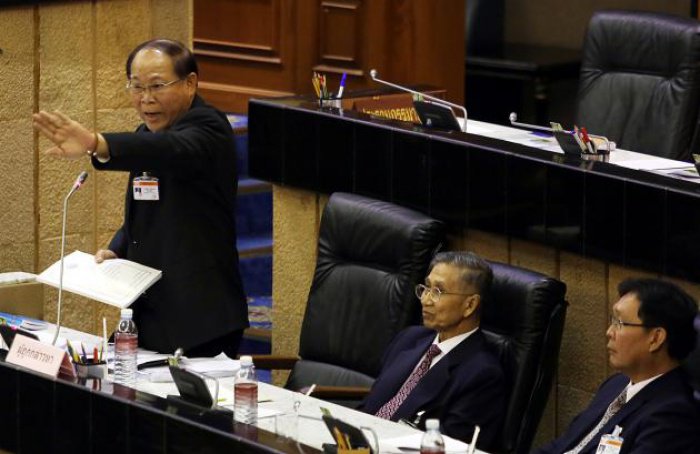 PHUKET: The National Anti-Corruption Commission (NACC) yesterday insisted that impeachment of politicians perceived as “enemies of the country” would promote, rather than undermine, national reconciliation.

“Impeachment of wrongdoers who are the enemies of the country will promote reconciliation eventually. It’s better than dropping the case or doing nothing,” said Wicha Mahakhun, who represented the NACC at the inquiry session of the National Legislative Assembly (NLA).

The NACC realises the importance of reconciliation, but believes it should abide by the moral code and the rule of law, he said, adding it would pursue the impeachment cases as far as possible so that the cause of justice is served, he said.

He was reacting to questions from NLA members on whether pursuing the cases would affect national reconciliation or reforms.

The assembly posed queries to the NACC, the accuser, and former Parliament president Somsak Kiatsuranon and his former deputy Nikom Wairatpanij, who have been accused of violating the 2007 Constitution by trying to push through an amendment to change the Senate’s make-up.

Somsak, who failed to show up for his opening statement last week, attended the meeting yesterday and told the NLA that the Constitutional Court’s ruling that he had violated the charter by trying to amend the composition of the Senate was wrong.

“I did nothing wrong. My actions do not warrant impeachment, which needs an act of intentional wrongdoing [to be punished],” he insisted before the NLA members.

“I come here today to seek justice. If you [the NLA] cannot give me [justice], I don’t know where to find it,” he said.

Nikom said during questioning that the constitutional amendment bill was aimed at “giving democratic power back to the people” and that he had done nothing in violation of the charter.

“The amendment that required all senators to be elected would have benefited the people directly. I don’t personally benefit from it. This could be considered as giving democratic power back to the people, for them to elect all of their senators,” he said.

He also disputed the accusation that as an incumbent senator, he would benefit from a clause in the amendment bill that would allow elected senators to seek re-election. The former Senate speaker said there was no certainty that he would have contested the next Senate election and even if he had run, there was guarantee that he would have got elected.

Nikom also argued that the 2007 Constitution, which was abolished after the coup in May last year, no longer existed. He asked how the NACC could bring a case against him based on a law that did not exist.

The NACC representative argued that though the 2007 charter was defunct there were still laws in the NACC act and the Constitution’s corruption bill that could be used against Somsak and Nikom.

“Other independent organisations’ laws are still active, which means the NACC bill 1999 and 2009 can be used against the accused politicians,” Wicha insisted.

He also said Somsak and Nikom’s actions fit the law as they had intended to violate the highest national law, and had also violated the integrity of their parliamentary positions.

The NACC added that Somsak had forged the draft of then MP Udomdej Rattanasatien on the senator issue, and brought the new draft to a Parliament meeting for scrutiny, which was unlawful.

Wicha said Somsak’s action could also be tried under criminal law, and the NACC would proceed with pursuing a case against him in criminal and other courts.

The closing statements in the two cases are scheduled for January 21 and the impeachment vote is set for January 23.

Today, the NLA panel will question the NACC and former premier Yingluck Shinawatra, who will be present, on the impeachment case related to her alleged dereliction of duty in supervising the rice-pledging scheme.

The vote for her case is set for the same day as Somsak and Nikom’s cases.