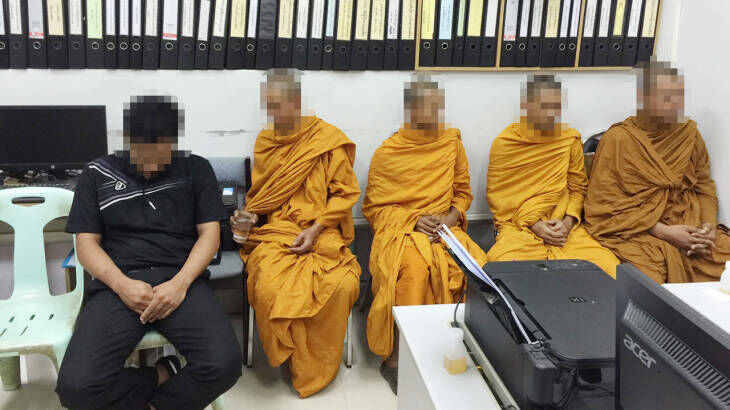 Monks in Krabi arrested for possession of drugs

The Sangha – the collective word for Thailand’s monastic community – has existed for thousands of years in Thailand. Ordained monks are expected to follow 227 rules outlined in the code of monastic discipline. However, monks clad in saffron robes often break the rules, even the serious ones such as no sex, no drugs, no stealing, no killing and no lying.

Have Buddhist monks always been naughty, or has modern mass media and technology simply brought their inappropriate behaviour into the spotlight?

Yesterday, government spokesperson Thanakorn Wangboonkongchana said PM Prayut had expressed his concerns about undisciplined monks who crucially affect the faith of Thai Buddhists. So, he ordered the National Office of Buddhism and Provincial Office of Buddhism, or POC, to ramp up their efforts to observe monks and ensure they are strictly adhering to their monastic code of conduct…

“The main duty of the monks is to maintain and propagate the teachings of the Buddha as well as studying Buddhist doctrines… The Prime Minister then ordered the POC to coordinate closely with the monk committees in all areas to monitor the monk’s behaviour and discipline in order to regain religious trust and faith among the public and prosper Thai Buddhism once again.”

Corruption and nepotism hold just as much of a place in Thailand’s Sangha Supreme Council of Thailand – the governing body of Thailand’s monks – as they do in Thailand’s various other institutions. The sangha is hierarchical, with charisma and power being attributed to certain individuals. Power can be used for good, but it can also be abused.

Wirapol Sukphol was a popular and revered monk who was defrocked and imprisoned in 2017 after he was charged for money laundering. Wirapol owned 22 Mercedes Benz cars, a mansion in California and ฿200 million in ten bank accounts. He was also accused of having sexual relationships with women, and raping a child who gave birth to his child at 15 years of age, a claim which the US Department of Special Investigation supported with DNA analysis. Wirapol is serving a 20 year prison sentence for his crimes.

“Corruption is the norm in Thailand rather than the exception. Powerful people behave in the most outrageous and illegal ways, and this is just accepted. Almost everybody who has power they can abuse does so, and what makes Wirapol stand out is not the fact that he was corrupt, or the fact he was a monk, but the fact that he was so successful.”

Wirapol’s case led many to believe that Thailand’s Buddhism was in a state of crisis. Four years later, badly behaved monks still make headlines in Thailand every day.

HolyCowCm
Who is he kidding? Look in the mirror first.
Smiler
Religion is mankind’s biggest corruption you see it the world over.

thaifarmer
1 hour ago, Smiler said: Religion is mankind’s biggest corruption you see it the world over. i would add indoctrination to that....
RichardR
I guess the Thai government will ban all need on corrupt monks. And if nobody can read the stories then they do no longer exist. Maybe in another 100 years Thailand realizes that the corruption and lack of consequence…
Rebel
Surprised when many of the monks are former criminals who seeks cover dressing up like a munk. Clothing doesn't make you a munk. There a many examples in the Thai sociaty that proves it. Suthep, Ducati killer etc.